R.I.D.E. Checks checking in on Humber 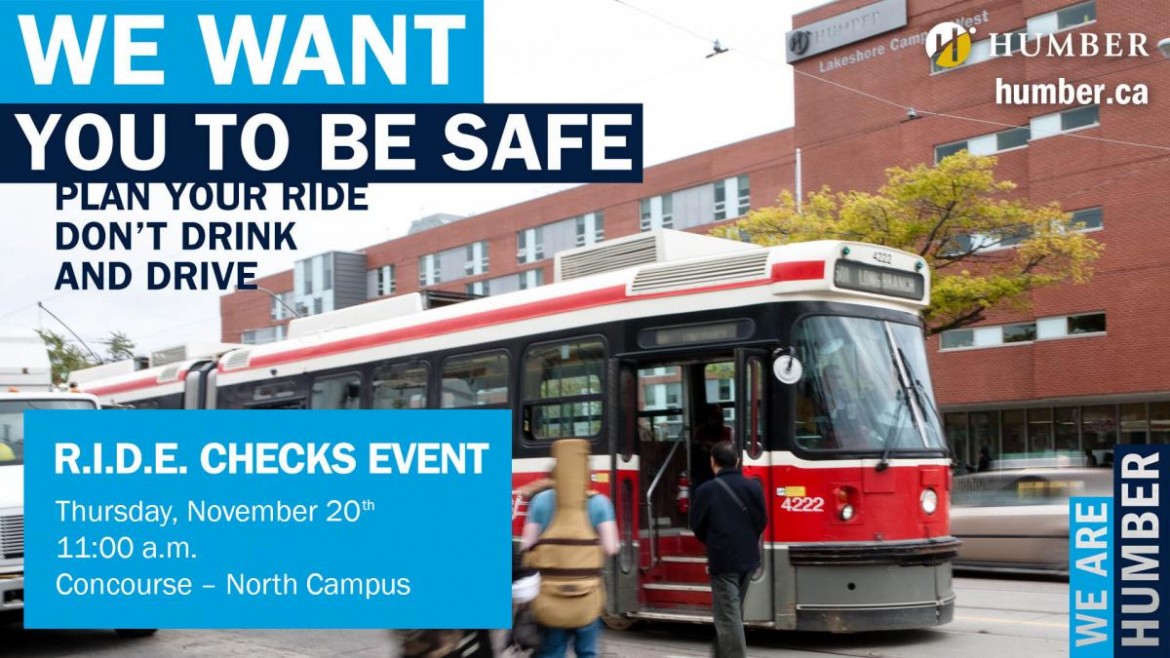 Humber College and the R.I.D.E. (Reduce Impaired Driving Everywhere) program are teaming up to bring more awareness about the dangers of impaired driving.

With the holiday season in mind, R.I.D.E. is holding a Humber-wide contest in an attempt to discourage impaired driving among the millennial generation.

The contest awards $2,000 to the best minute-long video made by a student, along with a slew of other prizes for runners-up.

The video can be made with a phone or a professional camera crew, as long as it relates to impaired driving.

The co-founder of R.I.D.E. Checks, Lorne Simon, encourages the Humber community to be creative with their entries.

“It’s so easy,” said Simon. “Everyone’s got a smartphone, you can even do it in groups.”

Whether someone has been personally affected by impaired driving or not, everyone can relate to its consequences.

“I hate waking up in the morning and watching CP24, seeing innocent people being wiped out by an idiot,” said Simon.

R.I.D.E. is concentrating its efforts on young people at colleges like Humber because that’s where they see a lot of these impaired drivers come from, said Simon.

“Not everybody gets the message, people are still doing this,” Simon said. “We can’t assume millennials know any better, because they’re still doing it.”

Sandra Finkelstein, the project leader for the engagement of Humber students for the R.I.D.E. Check program, says it emphasizes that there’s no excuse to drive impaired, whether that be under the influence of alcohol, drugs, or even the morning after consumption.

“It’s a choice, it’s avoidable, just like you have a choice to go to class,” said Finkelstein. “The consequences aren’t worth it.”

Finkelstein says the contest gives a platform for Humber students to express their views on the problem.

“It’s an opportunity for students to give a message and be heard,” said Finkelstein.

The contest closes on Nov. 6, and the winner will be announced at the R.I.D.E. official launch party on Nov. 19 at the Humber North Campus.

The R.I.D.E. program will also be setting up a booth at Humber North Campus in the concourse area on Nov. 3 from 11 a.m. to 2 p.m. to promote the contest and the launch party.

After all is said and done, Simon hopes this initiative can make an impact at Humber and around Toronto.

“If we can save one life, I’ll say we achieved our goal,” said Simon. “If we can get someone to say ‘Hey, I’ve had too much to drink,’ or ‘I smoked weed and shouldn’t be driving,’ then we’ve done our job.”

Contest submissions can be submitted through ridechecks.com/humber-ridechecks-video-contest/ until Nov. 6.