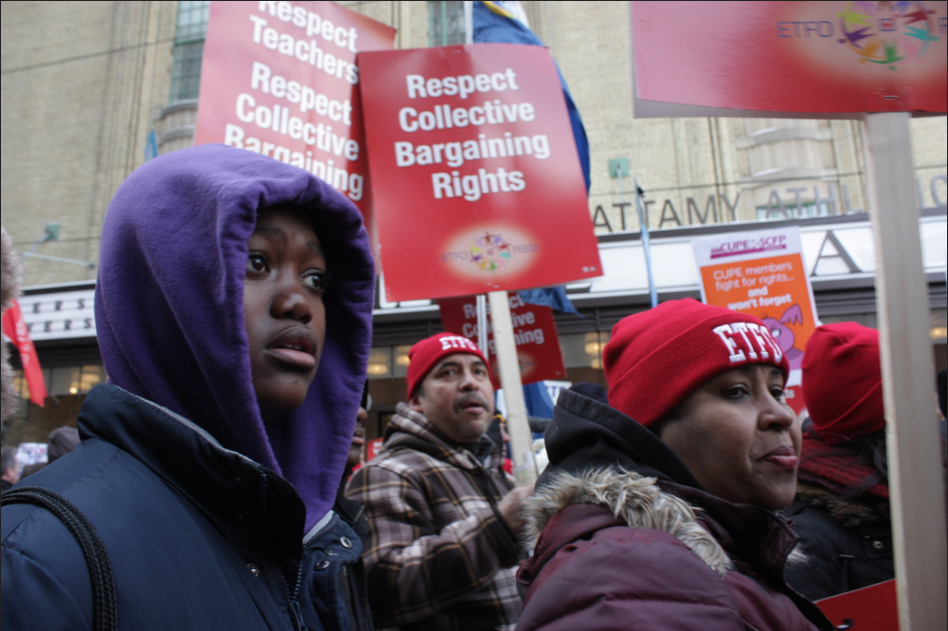 Teachers are returning to the classroom after work-to-rule action. Photo/Ontario Federation of Labour

After a bitter battle with the Government of Ontario, the Elementary Teachers’ Federation of Ontario (ETFO) have voted overwhelmingly in favour of a new contract.

According to a statement from ETFO, 86 per cent of Ontario teachers and occasional teacher members agreed to the deal.

Also, 98 per cent of the ETFO locals voted to ratify the central agreement.

The agreement was reached in early November after a lengthy negotiation.

ETFO president Sam Hammond said he was shocked at the development back in September when the Ontario School Board’s Association walked away from the central bargaining table.

However, Hammond was complimentary in Friday’s announcement.

“While this round of bargaining was exceptionally lengthy and difficult, ETFO members pressed for improvements related to student learning conditions such as special education, class size and composition, teacher professional judgement and health and safety issues,” Hammond said.

As part of the agreement, the unions and provincial government will review staffing and class sizes for full-day kindergarten and classes between grades four to eight.

“The Liberal government needs to focus its attention on elementary students. Class sizes in FDK, junior and intermediate grades that are in line with those at the secondary level, and supporting elementary students with special needs, should be priorities for the government and school boards on an ongoing basis,” Hammond said.

Other deal commitments include:

– The Ministry of Education, school boards and union officials will look at developing ways to better support special needs students.

– School boards have to make an effort to avoid the split of full-day kindergarten and grade one classrooms.

– Schools will provide occasional teachers with classroom keys to ensure the safety of students and staff in case of a lockdown.

– School boards will implement recommendations of the 2014 Health and Safety Task Force.