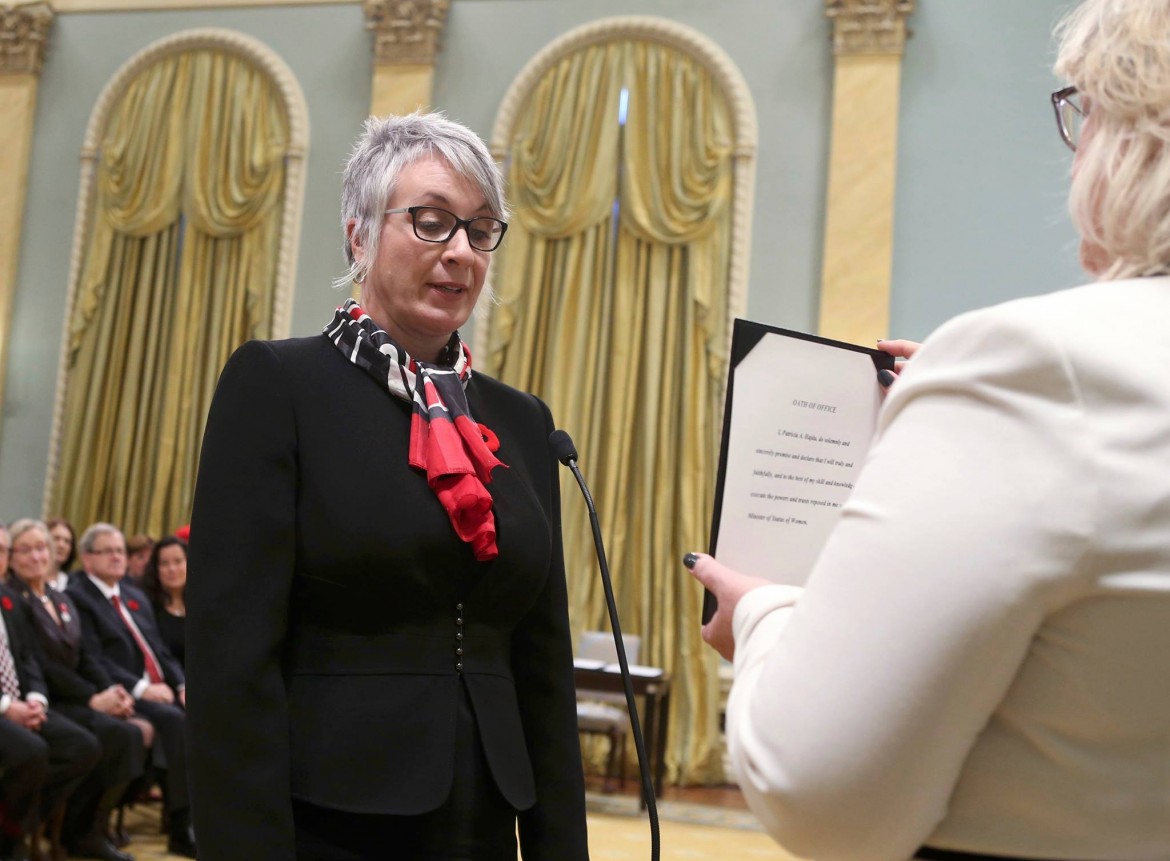 Patty Hajdu, minister of status of women, being sworn in to cabinet on Wednesday (Chris Wattie/Reuters)

In the longest election campaign of modern Canadian history, women’s rights were an issue hardly touched upon. Planned debates were cancelled, leaked reports never discussed and the candidates were never held accountable for policies that directly affect women’s rights and gender equality. The hot-button issues that have historically incited collective uproar among women lack a unifying voice in politics.

But that’s all about to change with Patricia “Patty” Hajdu, Canada’s new minister of the status of women.

With the government’s promised national public inquiry into more than a thousand murdered and missing indigenous women, the Status of Women is a file that now requires much sensitivity and experience in addition to exclusive attention.

Most importantly, she brings to Ottawa a wealth of experience in working with marginalized communities – a valuable asset in a state minister.

Hajdu said being appointed to the ministry was “an incredible honour” and said the experience felt “almost surreal.”

“Getting to participate in a level of governance that is that close to the Prime Minister… it’s not something you take for granted, that’s for sure,” Hajdu told Humber News in a phone interview.

Inquiry into missing and murdered women

The minister said she has not yet been given specific instructions about an inquiry, but she was looking forward to working with cabinet members.

“I can tell you right now that many of the ministers that are responsible for portfolios such as justice and health and infrastructure will be invaluable in working on that inquiry with us,” Hajdu told Humber News.

“Having written a number of strategies and policies and reports, I can tell you that an inquiry is only as useful as the commitment to acting afterwards, so I’m thrilled to be surrounded by such great colleagues who have many years of experience and files that will intersect with this.”

Hajdu stressed the importance of working with indigenous communities and First Nations.

“This inquiry needs to be led in true partnership with indigenous communities. It can’t be done to them or for them. It’s with them that we will do this inquiry and that will be the first step in terms of a truly comprehensive inquiry.”

Addressing reporters following the first cabinet meeting on Wednesday, new Minister of Indigenous and Northern Affairs Carolyn Bennett also stressed the need for an inquiry, but only after consulting with the families of the victims.

Hajdu, a political novice and the first female MP from Thunder Bay-Superior North, was elected with around 45 per cent of the vote in her riding.

Her rapid ascent to Trudeau’s inner circle highlights a sense of confidence in her talent and suggests a key role in the promised inquiry. Hajdu was also named as a member on two separate cabinet committees, including one on diversity and inclusion.

The appointment of a single minister to the portfolio of Status of Women is no accident. Earlier this year, an internal report by Status of Women Canada revealed that the country still lacks a national strategy to address violence against women, lagging far behind the likes of Australia, New Zealand, and the U.K.

“While rates of male-on-male violence in Canada have diminished over time, rates of violence against women have not, and reporting has not increased,” said the report, made public in September by the CBC. Women in rural, immigrant and indigenous communities were highlighted as particularly vulnerable.

Only two days into her new post on Canada’s first gender-balanced, Hajdu expressed a commitment to tackling issues facing women on a federal level.

“I worked with many women who suffer many horrible physical, psychological and practical consequences stemming from violence that often has been their entire lifetime. So it’s something that’s very near and dear to my heart.”

The report dated February 2015 also cited a “pay gap” that leaves women at a disadvantage. With men still paid 20 per cent more than their female colleagues, Canada ranked only above South Korea, Japan and Germany in pay equity.

Hajdu admitted women make up a large subset of those marginalized by poverty, and that the government has much to offer in combating their issues and enhancing key social determinants of health, such as access to education, affordable housing, running water, infrastructure, and a supportive network.

“Poverty can be alleviated, but it isn’t as simple as increasing rates of, for example, social assistance. I am a fan of making sure that people have an opportunity for economic success, but I also think it’s things like making sure there’s affordable housing in communities so that you have a stable place from which to develop.”

“All of those things matter and they lift people out of poverty. It’s no different for women. It’s just more profound because women often do end up being child-bearers, which is another blow, in a way.”

Hajdu’s rapid ascent to Trudeau’s inner circle highlights a sense of confidence in her talent and suggests a key role in the promised inquiry. (Courtesy: Trudeau campaign)

The report notes that poverty rates also rose slightly between 2009 and 2011 for one-parent families headed by women, part of a group that accounted for 69 per cent of low-income families.

“Single women are extremely vulnerable, their children are vulnerable, and we need to be able to support women in a way that’s more comprehensive economically, but also with the opportunity to develop leadership,” said Hajdu. “Because think of how many leaders there are out there that never get the opportunity to use those skills.”

A single mother who raised two sons while working two jobs and putting herself through grad school, Hajdu is no stranger to these issues. She credits her own success to a network of strong women, both in her family and mentors, and sheer luck.

“We do not talk about luck very often, because we live in a society that praises rugged individualism. As a byproduct of that, we have a bit of a narrative that if you work hard, you can achieve anything,” she said.

“That isn’t true, and there are many women who are marginalized through the circumstances of their birth, through the nature of their geographic location, and a number of other criteria, that work incredibly hard, just as hard as I did, and don’t necessarily have the type of outcome that I had.”

Eager for work to begin

For now, Hajdu is looking forward to getting to work, and being briefed by members of her ministry.

“I’m looking forward to hearing their thoughts about where they’re at and what kinds of things they feel that they’ve been able to champion. And also what things they haven’t had the support from a ministerial level to enact,” she said

“Because often times, the staff that are working on these files have a very good insight on where the barriers are in terms of the kind of work they want to do.”

With Prime Minister Trudeau’s mandate letters for cabinet members expected within a week, Hajdu is already making plans to fulfill the Liberal party’s campaign commitments in her ministry.

“The equality of women is interwoven throughout the ‘Real Change’ plan,” she said. “Jokingly, we talked about how we took a huge step forward with gender parity in cabinet. But that commitment is there. You can see it in our Prime Minister’s action, so for us, it will be about continuing that work.”

[Editor’s note: Hajdu’s son Jacob Wilson-Hajdu, 22, is a third-year journalism student at Humber College and Sports Editor for Humber Et Cetera. He was not involved in the writing of this story.]