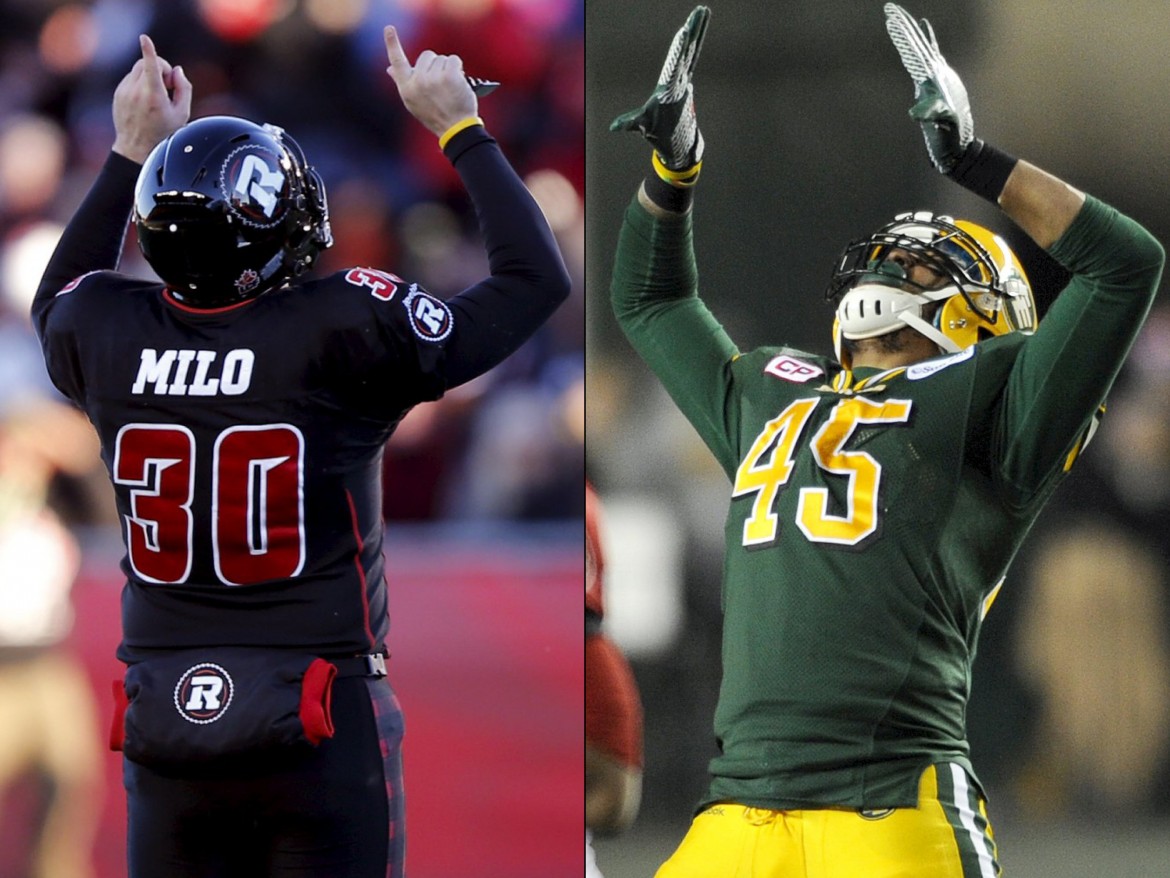 For the first time in 34 years the Grey Cup is within Ottawa’s reach. They faceoff against the Eskimos this Sunday (REUTERS/Chris Wattie and Dan Riedlhuber.)

For Edmonton Eskimos running-back Aaron Milton, it’s been a long road for him and his team.

They were eliminated in last year’s Western conference final by the Calgary Stampeders. This year, they will square off this Sunday against the Ottawa Redblacks in the 103rd Grey Cup.

Milton said keeping focus and staying away from distractions in the big game in Winnipeg will be a key to success in what he calls the biggest game of his life.

“It’s definitely the biggest at this point in my career,” Milton told Humber News this week.

“I’ve just been talking with the guys, they say you need to be locked in more than ever. I’m gonna really try and be focused on what we are doing and not the outside distractions.”

After last year’s disappointing loss, and throughout the offseason, there was only one goal on the Eskimos’ mind.

“We really felt like we were a good enough team to be in the Grey Cup,” Milton said.

“We all went home and worked our asses off during the offseason and came back and from day one of training camp we were all just focused on [the] Grey Cup,” he said.

Another man who’s aware of the pressures of the big game is two-time Grey Cup champion Mike Morreale.

“You try to treat it like a normal game, but it isn’t,” Morreale told Humber News.

“The night before is the time to kind of either hangout by yourself and just imagine what the next day is going to be like, the plays you are going to make and the whole hoisting of the Grey Cup,” he said.

“It’s also a chance to relax with your friends and get a chance to see your family. You try to keep it as low-key as possible.”

Morreale was a wide-receiver who recorded over 6,500 receiving yards during his 12 year CFL career with both the Hamilton Tiger-Cats and the Toronto Argonauts.

He said there is no better feeling than winning the Grey Cup and having your name etched in history.

“It’s pretty wicked,” he said. “When I sit back now and know that when I see the Grey Cup and see that my name is on it, it makes me feel really good to be a part of that history.”

Morreale said the chance to play with all of his teammates is one of the best parts about being a Grey Cup champion.

“When you’re playing with 60 guys week in and week out, they are your friends for life. You go to battle with them. That’s what I liked the most.”

The 103rd Grey Cup gets underway in Winnipeg on Sunday starting at 6 p.m. ET.