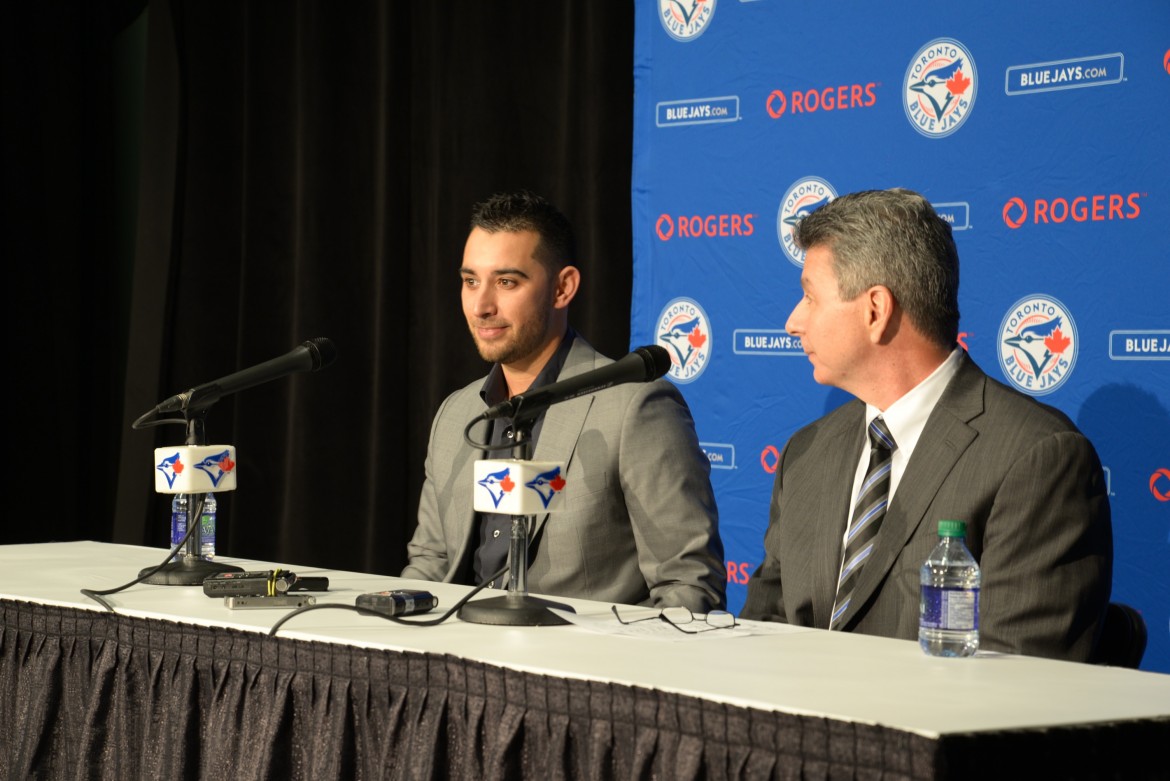 Marco Estrada (Left) and Tony LaCava (Right) Address the media Tuesday morning on the heels of Estrada re-sining with the Blue Jays. (Photo by: Domenic Loschiavo)

Over one week ago, the Jays offed Estrada a one-year qualifying offer worth $15.8 million. Instead of rejecting the contract and electing to go to free agency, Estrada countered with a two-year deal, which the Jays accepted.

Estrada spoke publicly Tuesday for the first time since inking his new deal. He talked about how he could have hit the open market but ultimately wanted to stay in Toronto.

“As the year went on, I fell in love with the city, the team and everyone here,” said Estrada.

“I knew it was a place I wanted to be in the next few years and I’m excited to get to spend some time here over the next two years.”

Although Estrada said his family loves the city now, it wasn’t an easy transition when the 32-year-old right-hander got traded to Toronto last off-season.

“With spring training being in Florida, and I live in Arizona, it wasn’t ideal,” Estrada said.

“I know my family wasn’t too happy,” he said.

“But once we got through spring training and moved to Toronto, they also fell in love with the city,” he said.

“They loved it out here, they had a really good time, felt safe and comfortable and that means the world to me. Knowing they liked it as much as I did here, I knew it was going to be an easy decision to stay here.”

Estrada said the deal works well for both him and the club and that he considered testing free agency but he ultimately wanted to be a Jay.

“I feel like it’s an extremely fair offer,” he said. “I wanted to be here a few years. I’m just glad they offered the two-year [deal].”

Estrada appeared in 34 games this year and had a career-high 28 starts.

LaCava said Estrada demonstrates the type of player he wants in his clubhouse.

“Not only is he a good competitor, he’s a great teammate and he’s everything we’re looking for and we are going to continue to try to find guys like that and add to what we have,” he said.

The Jays first acquired the pitcher from the Milwaukee Brewers last year in exchange for first baseman Adam Lind.