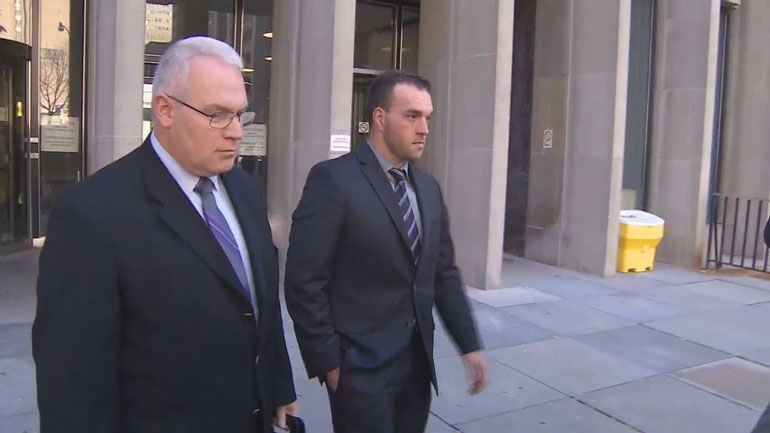 By Alex Martino and Andy Redding

The operator of the Dundas streetcar that Sammy Yatim spent his final moments on took to the witness stand today in the ongoing trial of Constable James Forcillo.

“Everything was as normal as it usually is on a streetcar on a Friday night,” Seymour testified.

Seymour testified that it wasn’t until they were approaching a regular westbound stop at Dundas and Grace that he heard a woman screaming and the words, “he has a knife.”

“They were frightening,” Seymour testified.

He said those words compelled passengers to rush to the front of the streetcar and saw “panic” and “worry” among them.

Seymour testified that when he looked back, he saw Yatim moving forward “in a normal walking pace” with a knife in his hand, which prompted him to magnetize the streetcar to the tracks so it would come to a complete stop.

The doors opened for passengers to evacuate near the intersection of Dundas and Bellwoods.

Seymour pressed several emergency buttons which alerted police to the fact that an operator was not comfortable with a situation on their vehicle.

When the doors opened Seymour recalled “pushing… swearing… [and] a flood of people.”

Seymour told the court that he wanted to get off, but Yatim approaching with a knife in his hand put him in a precarious situation.

“I had the opportunity to get off but I would have been close to Yatim and I didn’t feel comfortable having my back to a man with a knife,” said Seymour.

Earlier in the day, SIU investigator Steven Adam took the stand to testify.

The cross-examination was a tense back-and-forth between Forcillo’s defence attorney Peter Brauti and Adam, with questions about Yatim’s body language on the streetcar and whether he was under the influence of ecstasy.

Adam testified that he could not speculate on Yatim’s motives.

Video taken from the streetcar that night was shown once more in court today. It appears to show Yatim about to leave the car when a group of young women get on and he sits back down. When Brauti brought up their presence in the streetcar, Adam refused to speculate on whether Yatim sat back down because they were entering the streetcar. He also was unable to say whether Yatim’s knife was intentionally used to threaten the young women.

“He thrust his arm and the knife across in front of her… I’m not sure if he was at her throat to stop her from getting out of her seat… he immediately withdrew the knife back,” Adam testified.

When the defence persisted with the questions regarding the knife, Adam reiterated he did not know Yatim’s intent during the incident.

Trial resumes with Seymour recounting his take on the events caught on TTC surveillance video.