Rob Ford to undergo chemotherapy next week for new tumour 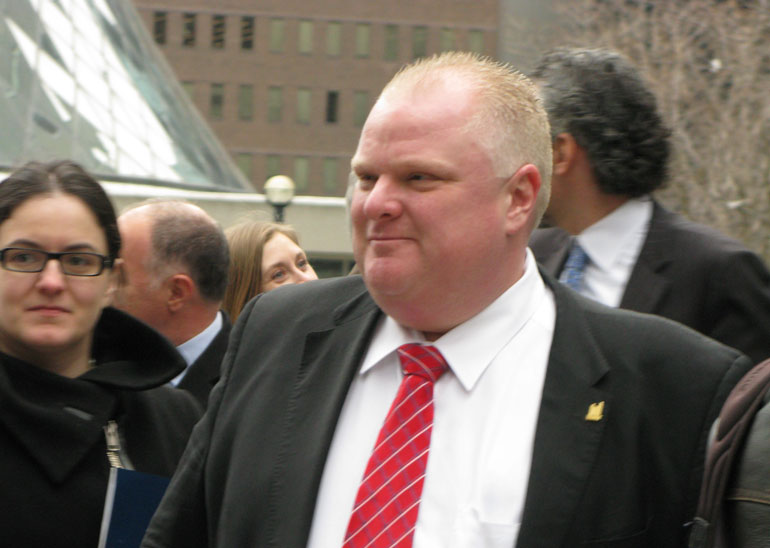 Coun. Ford seen at his weekly radio show in 2013. (Photo/Flickr)

Former Toronto mayor Rob Ford has a malignant tumour in his bladder and will undergo chemotherapy at Mount Sinai Hospital next week.

“We are just going to keep fighting this,” Ford’s brother Doug told reporters outside the hospital on Thursday.

“This is another big challenge,” he said.

Doug Ford first broke the news of his brother’s tumour on Wednesday telling local media, “I’ve never seen him in this much pain.”

Rob Ford’s doctors at Mount Sinai aren’t sure if his new prognosis is related to the abdominal liposarcoma he had last year, CBC reported on Wednesday.

A 2015 report by the Canadian Cancer society showed that around six per cent of men and around two per cent of woman in Canada have bladder cancer.

Dr. Katie Wright is the senior manager of research communication at the Canadian Cancer Society.

The organization invested more than $1.5 million this year in bladder cancer research, she said.

“They cover a variety of topics but include finding better ways to diagnose bladder cancer,” said Dr. Wright. “That could mean finding new biomarkers to detect cancer.”

There are different support groups and programs for cancer patients and their families, friends and supporters, Susan Fekete, a communication specialist at the Canadian Cancer society, told Humber News.

“If I pass before my time, I just ask people to try and help out Doug, Stephanie and Renata,” Ford said to CTV News today. “I won’t stop fighting until the day I die.”

The former mayor, as well as current Mayor John Tory and others responded to the news on Twitter:

“He says he’s going to run against me, and you know what, I hope he’s healthy enough enough to do so,” said Tory in an interview with CP24.