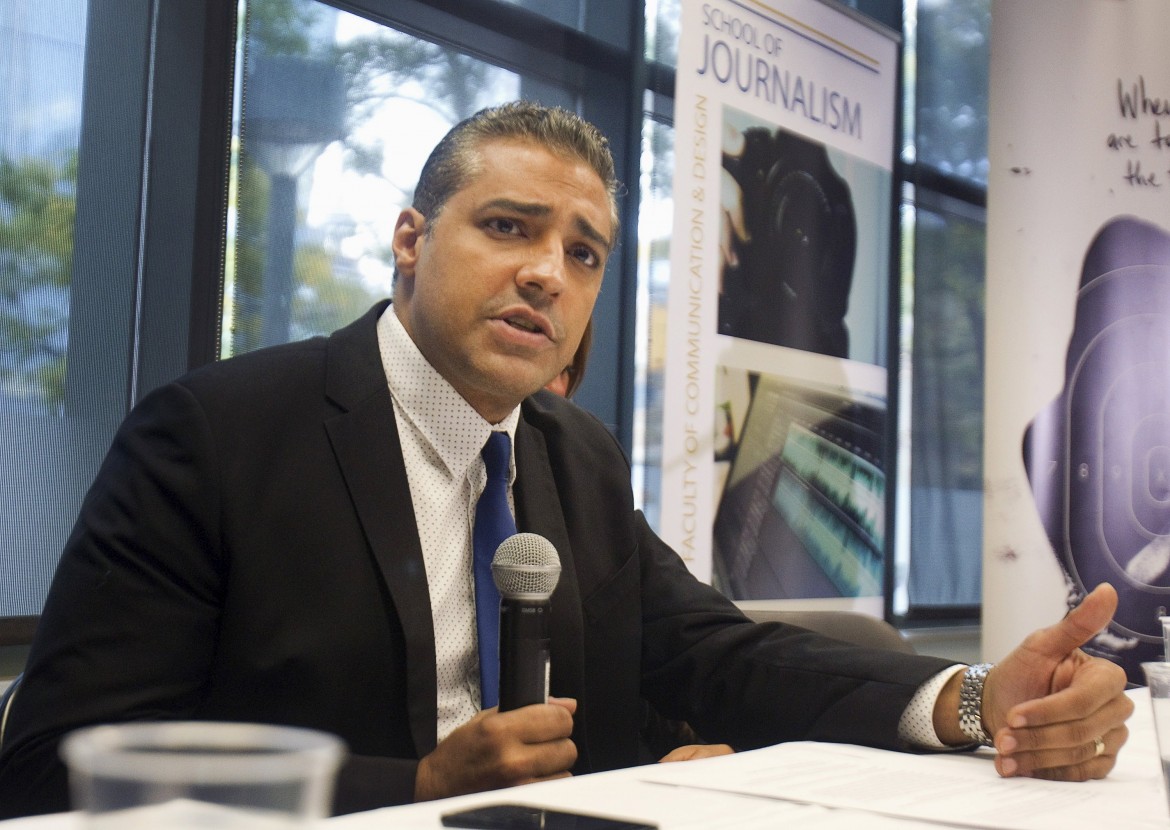 By Katherine Green and Christine Tippett

Freed Canadian journalist Mohamed Fahmy appeared at a press conference hosted by Canadian Journalists for Free Expression at Ryerson University on Tuesday. He spoke to the media only a few days following his return to Canada after spending over 400 days in an Egyptian prison.

Fahmy, accompanied by his wife and lawyers, began his address by sharing his immense gratitude to the thousands of supporters.

Fahmy spent several minutes discussing how uplifting the campaign for his freedom was, but eventually his tone turned solemn as he expressed his dismay in Prime Minister Stephen Harper for what he felt was abandonment and betrayal during his imprisonment. Fahmy has met with both opposition leaders, Justin Trudeau and Tom Mulcair, which he says were actively seeking his release during a time Harper refused to meet with his lawyers.

My wife and I enjoyed meeting the tireless & inspirational @JustinTrudeau to express gratitude for his support pic.twitter.com/PGTZPxtSEL — Mohamed Fadel Fahmy (@MFFahmy11) October 13, 2015

Catherine & I were honoured to meet with @MFFahmy11 and his wife Marwa — a family that has been through so much. —TM pic.twitter.com/OYWkvqdBSs

The Canadian journalist and former Al-Jazeera bureau chief was arrested in Egypt back in 2013 for charges of terrorism and affiliation with the now-banned Muslim brotherhood.

He and three other journalists were among 100 prisoners pardoned, by Egyptian President Abdel Fattah el –Sisi on Sept 23., the eve of Eid al-Adha holiday. Fahmy’s wife Mawra Omara, who stood by his side throughout the two difficult years, spoke to the crowd about moving forward after the tough and dramatic period.

Despite Fahmy’s strong stand against the government’s lack of intervention, he’s excited to be back home and sharing his story.

Happy Thanksgiving for us all! Lots of love to all my fellow Canadians and journalists who made it happen! #Freedom pic.twitter.com/HNExtHOepN — Mohamed Fadel Fahmy (@MFFahmy11) October 12, 2015

Fahmy said he would like to focus on advocating for the freedom of 220 journalists still in prison around the world. He will do so through his newly created Fahmy Foundation for a Free Press.