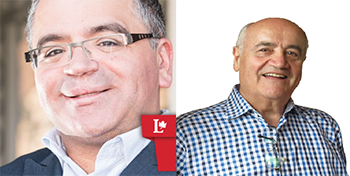 By Christine Tippett and Hunter Follon

Liberal candidate Francesco Sorbara has defeated Conservative incumbent Julian Fantino in the first-ever Vaughan-Woodbridge election campaign, according to CBC. With 175 of 195 polls accounted for, Sorbara is leading with 48.5 per cent of the vote over Fantino’s 44.2 per cent.

One trending storyline from the evening was the whereabouts of Fantino, who wasn’t seen in person or active on social media leading up to the vote. Conservative supporters began to leave the Vaughan-Woodbridge headquarters once reports indicated Sorbara would win.

After some confusion, Fantino and his wife Liviana confirmed they were on their way to Vaughan-Woodbridge Conservative headquarters around 11:15 p.m.

Standing at the podium, wife by his side, the former Conservative MP thanked his family and all the volunteers who helped on his campaign.

“We’re all winners because this is democracy at work,” Fantino said. “The people of Vaughan-Woodbridge have spoken.”

Fantino was disappointed with the election results, but says he’s happy to be able to spend more time with family.

Fantino and Sorbara had been making their presence known in the area by knocking on doors, hosting events and maintaining an active presence on social media.

Meanwhile, NDP candidate Adriana Zichy hadn’t made any appearances, despite landing the nomination months ago.

Vaughan was one of the many suburban ridings in the 905 area that voted Conservative in the last election.

Fantino won the defunct-Vaughan riding in the 2010 by-election, narrowly defeating Liberal candidate Tony Genco by 964 votes and securing the first non-Liberal hold on the riding in more than two decades.

The riding’s demographics are of particular interest. According to the 2011 National Household Survey, almost 20 per cent of residents in this riding were born in Italy, the highest proportion in Canada by far.

Moreover, with half of the ridings’ residents are of Italian heritage, it comes as no surprise both candidates are Italian.

The infamous Fantino was originally elected to the House of Commons in 2010 and was reelected in 2011.

Serving almost 40 years in law enforcement, Fantino spent 23 years with the Metro Toronto Police, followed by seven years, sometime turbulent, as Chief of the London Police. During his time in London, Fantino was accused of homophobia during the controversial “Project Guardian”, in which dozens of gay men were falsely accused of child pornography. None of the accused were ever convicted of pedophilia.

Fantino’s campaign has been plagued with controversy at multiple points, including being charged over an alleged assault during a police raid in 1973.

Sorbara has over 20 years in corporate finance, and said he was committed to bringing infrastructure and economic change to the area.

On the issue of marijuana legalization, Fantino and Sorbara have opposing views. According to CPAC, Fantino is strongly against legalization, whereas Sorbara says the current policy is failing, making it easier for youth to access marijuana than cigarettes.

According to online election prediction website threehundredeight.com Liberal Sorbara had a slight edge over Conservative Fantino leading up to the election, with NDP trailing a distant third.

Also running in this riding was Green party candidate Elise Boulanger, a Global Studies student at Vancouver Island University, and Antony Gualtieri for the Libertarian party.

This riding has new boundaries since the last election, and is a much smaller version of the old riding of Vaughan. It has been split in half to create Vaughan-Woodbridge and King-Vaughan.

With files from Christina McAllister and Christine Tippett