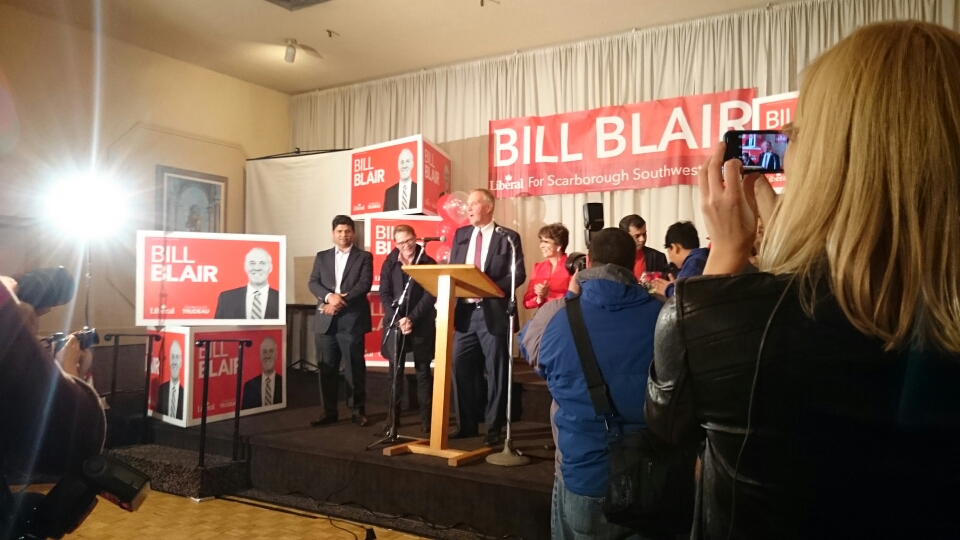 By Nicole Williams and Ken Kellar

Former Toronto police chief Bill Blair has won the riding of Scarborough Southwest, displacing Dan Harris, the NDP incumbent who had held the riding since 2011.

Green candidate Tommy Taylor, who entered the race specifically to challenge Blair after his arrest during the 2010 G20 protest, received 2.7% of the vote.

2011 had the Orange Wave. This is a Red Tsunami #humberelxn #elxn42

Blair has a long public relationship with Toronto. Having grown up in the Scarborough Southwest region, Blair went on to serve as police chief for ten years before retiring in April 2015. Mark Saunders was appointed to his position that same month.

Despite the popularity Blair has enjoyed in his riding, his election as a Liberal candidate remains controversial to many. The former police chief was heavily criticized for his handling of the G20 protests in 2010.

The Harris NDP victory of 2011 came as a bit of a surprise, as Scarborough Southwest had been a Liberal stronghold from its conception up to that election. The riding had previously been held by Michelle Simpson.

Harris is a prominent public figure in his riding and had the blessing of former NDP leader Jack Layton, who named Harris deputy critic of Science and Technology. Harris currently holds the title of critic for post-secondary education under current NDP head Tom Mulcair.

When Harris won his riding in 2011 he surpassed the Conservative candidate by more than 1,200 votes. The Liberals lost by more than twice that number. With this election, the Liberals aimed to score a comeback with their star candidate.

The Conservative candidate was Roshan Nallaratnam, a Toronto police officer who has been part of the force for six years. Nallaratnam immigrated to Canada from Sri Lanka in 2005. The party hoped this would give their candidate an advantage with the riding’s immigrant communities, which makes up more than 45 percent of the area’s population.

Representing the Green party in Scarborough Southwest was Tommy Taylor. Taylor added to the election drama of the group in a unique way, as a political activist who was among those arrested by Toronto police during the G20 protests. Taylor said his wife was also unlawfully arrested during the protests.

with files from Jeremy Appel, Marino Greco and Jessica Tedesco