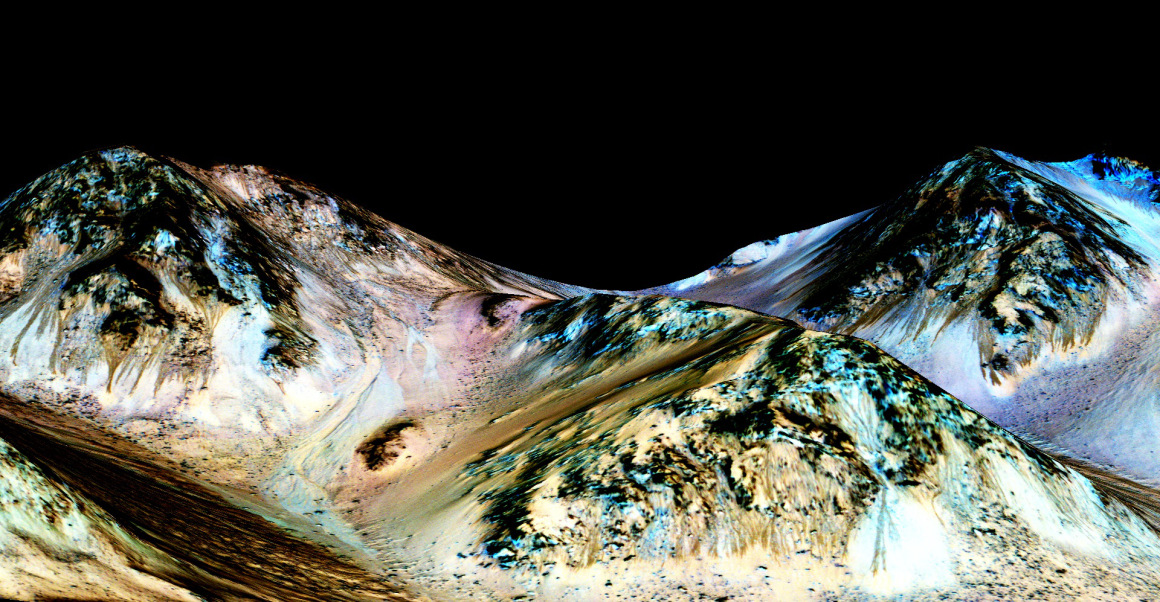 Streaks flowing downhill on Mars are believed to have been formed by a “seep” of flowing water. Recently, scientists detected hydrated salts on these slopes at Hale crater, corroborating their original hypothesis that the streaks are indeed formed by liquid water. (Courtesy: NASA/JPL/University of Arizona)

NASA announced in a news conference Monday that it has found evidence of liquid water flowing on Mars, pointing to more habitable conditions near the surface than previously thought.

“The existence of water, even if it’s super briny, gives the possibility that if there’s life on Mars we have a way to describe how it might survive,” said John Grunsfeld, associate administrator for the Science Mission Directorate.

Researchers have been analyzing images collected by the Mars Reconnaissance Orbiter (MRO) which show strong evidence that the distinctive seasonal dark streaks are the result of briny water periodically flowing across the planet’s surface during the summer months.

The findings were presented in a study titled “Spectral Evidence for Hydrated Salts in Seasonal Brine Flows on Mars” published in Nature Geoscience on Monday. The study will also be presented at the European Planetary Science Congress in Nantes, France this week.

Water has previously been discovered in the form of ice on the surface and moisture in the atmosphere of the planet, but this is the first indication of active liquid flow in contemporary conditions.

The announcement, which carries great implications for the viability of life on the Red Planet, was made by a panel at NASA headquarters in Washington, D.C.

The panel included researchers Lujendra Ojha and Alfred McEwen. who are also part of the team that first discovered the dark streaks, also known as recurring slope linae (RSLs), on the Martian surface in 2011.

““What we’re dealing with is wet soil, thin layers of wet soil, not standing water,” said McEwan. He said he believes the possibility of life on Mars to be “very high,” though it would be microbial and somewhere in the Martian crust.

The MRO is one of seven active missions to Mars, including five orbiters and two surface rovers, but NASA ruled out the possibility of manned missions any time soon.

“Presently, NASA is looking into the possibility of sending humans to the vicinity of Mars in the early 2030s. In this scenario, the earliest humans to the surface would be in the late 2030s,” said Rich Zurek, chief scientist at the NASA Mars Program Office in a Reddit AMA following the announcement.

“The next step is to look for more locations where brine flows may occur,” said Zurek. “We have covered 3% of Mars at resolutions high enough to see these features.”

The new data has been collected by the Compact Reconnaissance Imaging Spectrometer for Mars (CRISM) instrument aboard the MRO, indicating the presence of salts known as perchlorates in the dark streaks. These salts create an increased stability for liquid water to exist in the harsh climate of Mars, said Ojha.

The scale of temperatures at which liquid water can exist on the Martian surface, with or without dissolved perchlorates. (courtesy Luju Ojha/NASA)

However, researchers were cautious about creating unrealistic expectations for the sustainability of human life on Mars just yet.

“Potential habitability by earth-like microbes is unclear. To assess habitability, we would first need to determine how cold and how concentrated the brine is,” said researcher Mary Beth Wilhelm of NASA’s Ames Research Center who c0-authored the revolutionary study.

The findings are helping the space agency make more definitive plans for their ongoing exploration of Mars. NASA’s planned 2020 rover will carry an instrument to test ISRU (In-situ Resource Utilization) that will take the Martian atmosphere, mostly carbon dioxide, and extract the oxygen from it.