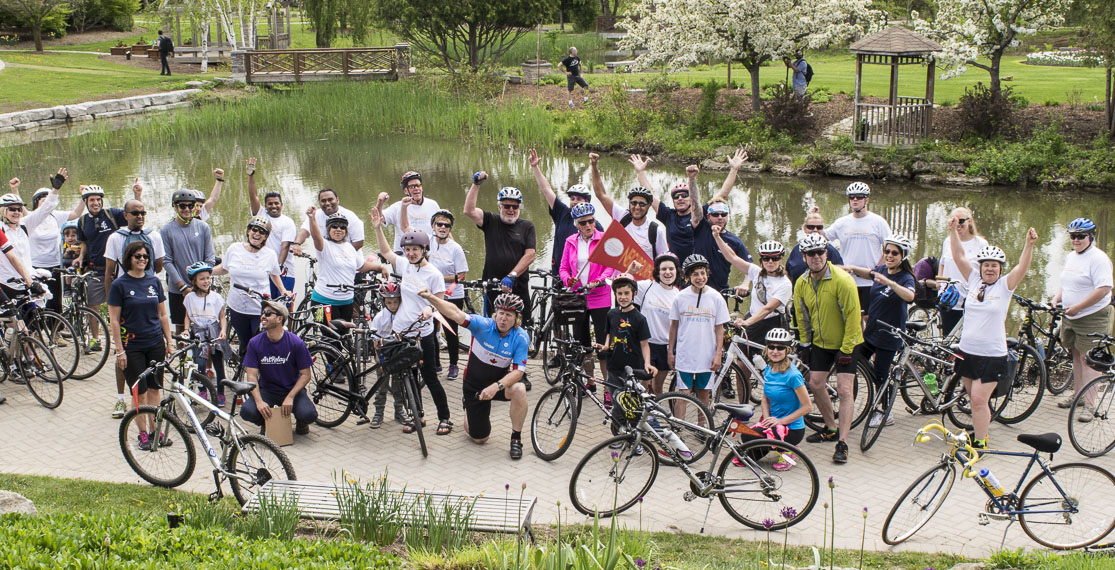 Approximately 50 members of the community and volunteers came out for the P4K community bike ride.

Three-time Olympian and cyclist Curt Harnett led a pack of enthusiastic riders along the Humber River on Saturday May 16, at the inauguration of the Pan Am Pathway.

Approximately 50 volunteers and GTA-community members showed up for the 20 km ride, which started at the Humber Arboretum and Centre of for Urban Ecology and travelled to Pine Point Park and back.

The community bike ride was organized by Playing for Keeps, or P4K, an initiative of the Toronto Foundation started in 2010 after winning the Pan Am Game bid.

“The Pan Am games really bring a significant spectrum of opportunities to our communities, and the arts, cultural and societal elements to it are really key to promote the idea that we need to get people more active,” said Curt Harnett, Chef de Mission for Pan Am Games.

Curt Harnett, three-time Olympian chats with the public at the Humber Arboretum and Centre for Urban Ecology before the start of the 20 km community bike ride.

“The concept behind the Pan Am Path is engaging not only to be super healthy and super active, but to also appreciate what this great city has to offer in a very unique way in a global way,” said Harnett.

Rosalyn Morrison, Vice President of Community Initiatives at the Toronto Foundation and chair of the organization’s Playing for Keeps Initiative also joined the ride. She said that Toronto’s Vital Signs Report was used as a strategic guide to evolve P4K as way to celebrate and improve quality of life for the city’s residents.

“We have seen a number of issues in our city such as a divided city, wavering sense of belonging, lack of opportunity for youth and getting people more active,” said Morrison. “We are hoping the Pan Am Path will be that iconic project that is able to continue the legacy that was inspired by the games.”

Once the city of Toronto completes the infrastructure by 2017, the new path connections will link over 80 km of existing trails stretching across the GTA from Claireville Dam in Brampton, to the Martin Goodman Trail along the lakefront, and north to the Don River. The path will continue north east in the city along the Gatineau Hydro Corridor and eventually connect to the mouth of the Rouge River in Scarborough.

The path will also lead to four Pan Am sport venues. The path is part of Toronto’s Pan Am Parapan Am Games Host City Showcase program, and also displays local artworks such as murals under bridges along the way. The city contributed $1.9 million to the project.

Devon Ostrum, lead curator for Friends of the Pan Am Path, said the idea to connect the paths came from the community who complained about the loss of connectivity of the trail system.

“You’d be biking and all of a sudden you’d be stopped by a highway,” said Ostrum.

Ostrum also says he was “concerned with the disconnect between the downtown core and the inner suburbs,” and the fact that many people didn’t even know that these trails exist. He said he hopes that more people will come out to enjoy nature and the art along the path.

“For me it was an opportunity to meet new people, make new friendships and see what this city has to offer,” Harnett. “To be outside and enjoy that experience with some great people is important to me.”

“It was fun, amazing, and would do it again if I could,” said Maya Oren, 17 who showed up for the ride along with her mother and stayed near the front of the pack with Curt Harnett.

“The goals of connecting the path aligns beautifully with P4K because we really will be connecting divided communities,” said Morrison. “Think of people from Rexdale riding, jogging and walking the path and meeting people from Scarborough. It’s a beautiful opportunity to bring to life the vision for Toronto … that it is the best place to live, work, learn and grow.”

Community members enjoy the scenery along the West Humber River on the Pan Am Path.