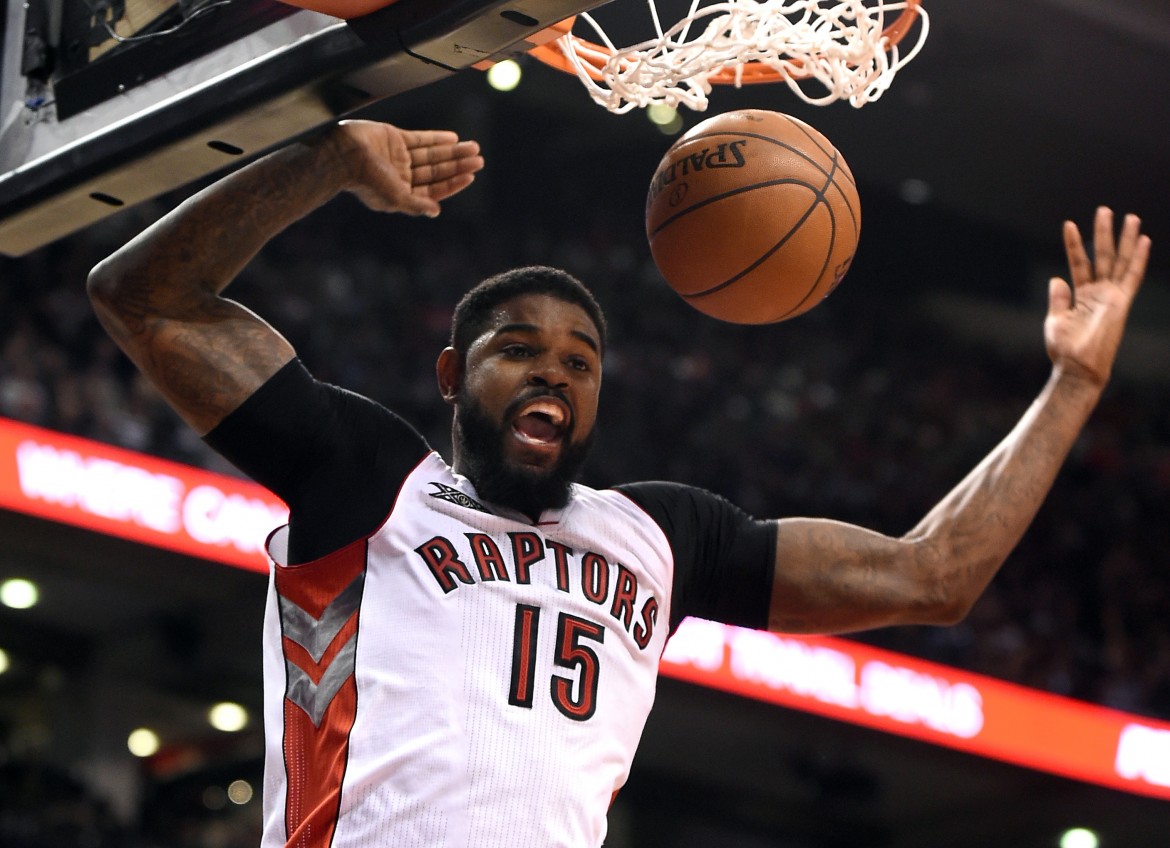 Demar Derozan of the Toronto Raptors shakes hands with teammates in a game vs. the Orlando Magic on April 10, 2015. (REUTERS/USA TODAY sports/Kim Klement)

Just one year removed from their early playoff exit, the Raptors are back in postseason play.

The Raptors came into last year’s postseason as an underdog versus the Brooklyn Nets and then promptly stunned the NBA when they took Paul Pierce, Kevin Garnett and the rest of the Nets to game 7. With just a win away from advancing to the second round, the Raptors had the final possession. Down 104-103, Kyle Lowrie had the ball and the game in his hands. Heaving up the final shot, Lowrie’s ball was blocked by Paul Pierce and the Raps fell short of advancing to the next round.

Back in the hunt again this year, the Raptors will meet the Washington Wizards. Toronto has swept Washington in the regular season and are expected to be motivated coming into these playoffs after setting a franchise record for most victories in a season with 49 wins.

For the second consecutive year, the Raptors have won an Atlantic Division title. They have more depth with the addition of Lou Williams and James Johnson, who were acquired in the off-season.

As for the fans, there is a more business-minded approach compared to last year, said Steve Loung, an NBA writer for Sportsnet.

“Last year was like a fun party atmosphere,” Loung said of the fans’ mood towards the Raptors’ post-season. “It’s no longer, ‘hey we’re just happy to be here’. Fans have higher expectations.”

“Experience” is the biggest difference this year, according to Alex Ballingall, NBA writer for the Toronto Star.

“They are now more aware of the atmosphere and the degree of the intensity,” Ballingall said. “Having a taste of that is the main difference this year.”

The most exciting man-to-man match ups in the series could be between the four best players on the court. John Wall averaged 10 assists per game, which ranked him second in the league at the end of this season. Bradley Beal is also coming off a stunning season, averaging an impressive 40 per cent in three-point shooting percentage.

The X-factor, could very well be the health issues of Beal and Wall. Beal missed six weeks of playing time earlier in the season after undergoing surgery to repair a fractured wrist, while Wall hadn’t completed a full 82-game season up until last year.

Loung said that if the Raptors can get physical with the Wizards then they won’t be able to keep up.

“The Raptors can exploit [Wall] and Beal with post-ups and little things, make them unbalanced and make them feel uncomfortable,” Loung said. “Particularly Beal who has an obvious injury history. Give him a little bump here and there, he might think twice about going in the lane.”

As for the Wizards, the way they beat the Raptors is by using their speed and precision passing skills, said Ballingall.

“They have trouble fighting through screens which could be a problem for them,” Loung said. “That could actually be a vulnerability for them if they don’t step that up.”

Bradley Beal of the Washington Wizards takes a layup in a game against the Utah Jazz on Mar.18, 2015. (REUTERS/USA TODAY sports/ Chris Nicoll)