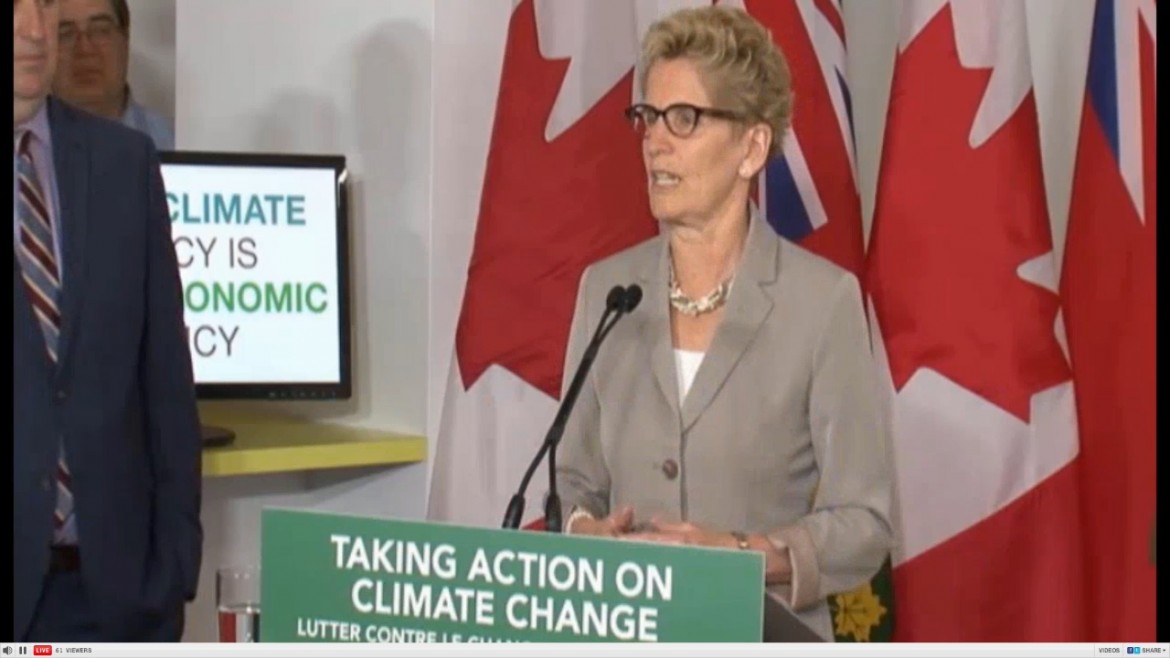 Ontario is taking a bold step in the fight against climate change, announcing plans to implement a “cap and trade” system in the province.

“Climate change is not a distant threat,” said Premier Kathleen Wynne while announcing the policy in Toronto. “We’re talking about something that’s with us and we’re dealing with it every single day.”

Highlights of the Premier’s speech can be seen in the video below:

Cap and trade is a system wherein the government “caps” the amount of pollution industries are allowed to emit, and creates a market where companies are given credits that allows them to emit carbon into the atmosphere.

Larger polluters can purchase credits from smaller polluters in order to increase their carbon emissions.

According to the Environmental Defense Fund, companies can turn their credits into revenue – if they reduce their carbon emissions, they can gain revenue by trading with companies that want to have higher emissions.

“Good environmental policy is good economic policy,” said Wynne. “Those two things are inextricably linked, and we have to realize the opportunities with which we’re faced.”

“Greenpeace congratulates Premier Kathleen Wynne on taking this important step towards implementing an economy that will put a price on carbon pollution.” – Keith Stewart.

The government says any revenue it garners from the emissions trading market will be reinvested into projects that reduce greenhouse gases. Ontario is also planning to join the Western Climate Initiative, in which Ontario’s cap and trade market will be joined with Quebec and California’s markets.

Ontario’s Environment and Climate Change Minister Glen Murray, who joined Wynne at the announcement, said the government will work with industry partners to develop an emissions trading market by October.

The announcement was met with praise from those in the environmental movement.

“Greenpeace congratulates Premier Kathleen Wynne on taking this important step towards implementing an economy that will put a price on carbon pollution,” Keith Stewart, head of Greenpeace Canada’s Climate and Energy team, told Humber News in an emailed statement. “A strong, well-designed carbon price will help put Ontario on the path to a fossil fuel-free future, so we hope Premier Wynne will continue to listen to the people as the details of the cap-and-trade system are hammered out over the coming months.”

“Cap and trade can be a very effective tool if it’s done right.” – Keith Brooks

“Cap and trade can be a very effective tool if it’s done right,” he said.

Brooks said cap and trade works because it sets a limit on the amount of emissions released, as opposed to a carbon tax, which taxes polluters on the amount of pollution it releases but doesn’t offer an incentive to reduce emissions.

He was also supportive of the government’s proposal to invest revenue in projects such as transit and green energy.

But not everyone was as effusive in their praise. In an editorial in the Globe and Mail, former CIBC World Markets chief economist Jeff Rubin called cap and trade systems “little more than a cash grab.”

The government acknowledged that gas prices in Quebec have gone up by 2-3.5 cents per litre as a result of cap and trade, according to Quebec government estimates.

WHAT IS CAP AND TRADE? | Create infographics