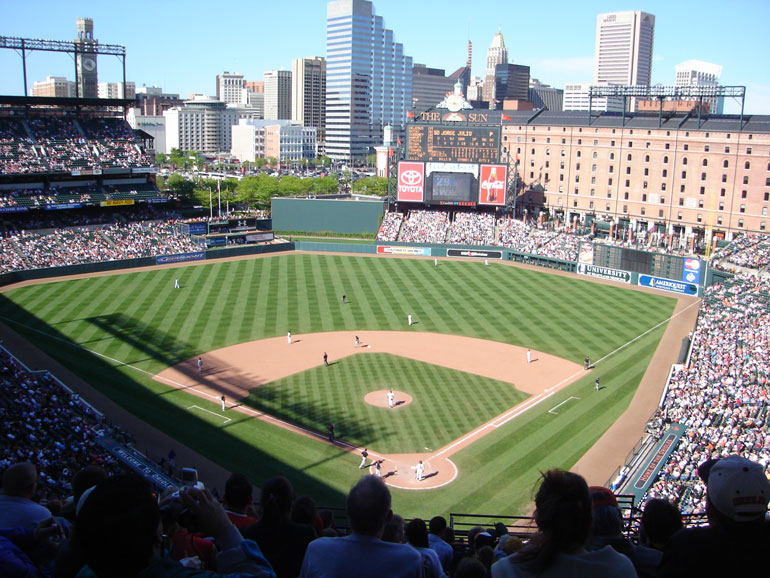 Camden Yards, home of the Baltimore Orioles. They defeated the Chicago White Sox with no fans watching on April 29. (Photo by Wikipedia)

The field was quiet, the fans non-existent as the Baltimore Orioles took on the Chicago White Sox at Camden Field on Wednesday.

Visitors were shut out of the stadium amid fears of spill over violence from riots in the city.

On April 12, Freddie Gray, 25, was shot by police, resulting in spinal and larynx injuries.  He died in hospital a week later.

The Orioles beat the White Sox 8-2 as the lonely game went viral across social media.

Ever wondered what a Baltimore @Orioles game looks like with no fans? Wonder no more http://t.co/421gJdWpO9 pic.twitter.com/pMrFRhnTRG

Today's game in Baltimore is believed to be the first in MLB history with no fans http://t.co/SMUopSX2qF pic.twitter.com/1qMKVu2Wtc

The Baltimore Orioles are playing their game tomorrow at home in a closed stadium, with no fans. How odd is that going to be.

Surreal to be sitting in the park for what essentially feels like a private screening of an #MLB game.

The park may be empty, but the 7th-inning stretch lives at #WhiteSox–#Orioles! Including John Denver (as usual here) pic.twitter.com/MCCwpY0NIn