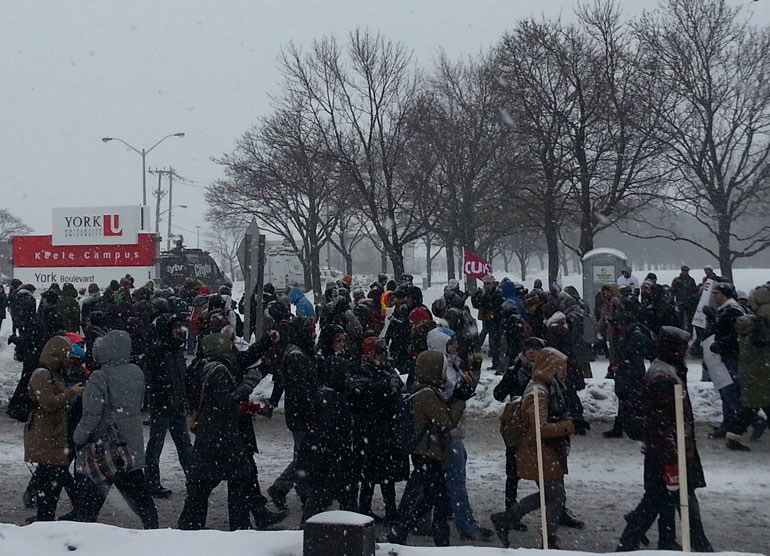 Teaching and graduate assistants will return to work at York University after a new deal was accepted by the union on Tuesday night.

“With this final update, I am pleased to confirm that CUPE 3903 Units 1 and 3, our teaching assistants and graduate assistants, voted today to accept new three-year collective agreements,” said York president Mamdouh Shoukri in a statement released on Tuesday.

The ratification vote was held at the Rexall Centre earlier in the afternoon.

The new deal with York’s administration will put an end to the school’s labour disruption and resume all classes.

CUPE 3903 chairman Faiz Ahmed described the deal as ‘historic’ because the union was able to negotiate the offsetting of tuition fees, increases in research funding, and the recognition of LGBTQ as an employment equity group.

In a press release by CUPE 3903, the deal ensures that any future increases in tuition fees will be matched dollar-for-dollar in graduate student funding.

The ratification ends a strike that lasted nearly a month after CUPE 3903 members set up picket lines on March 3. The union represents nearly 3,700 TAs, contract faculty, and graduate assistants at York.

Contract faculty accepted a separate deal with York on March 10, which left TAs and graduate students as the remaining CUPE 3903 units on strike until Tuesday.

The new agreement will put “pressure on universities everywhere to follow suit, ” Ahmed said in a CUPE 3903 press statement.

Still, tuition fees in Ontario remain the highest in Canada.

According to Statistics Canada, the average undergraduate in Ontario paid $7,539 in tuition fees for the 2014-15 academic year.

In contrast, students in Newfoundland and Labrador are paying the lowest tuition fees in the country with an average of $2,631.

“That type of funding required for those types of projects need to be built in a predictive funding base from Queen’s Park,” said Ahmed. “Right now, Queen’s Park does not have a predictive system of distributing funds to the universities.”

“Hopefully this (deal) is going to pressure Queen’s Park by way of the university administration,” he said.

Situation compared to U of T

TAs at the University of Toronto returned to work last Friday after their own union overwhelmingly voted in favour of binding arbitration.

CUPE 3902 went on strike on Feb. 27 before their York counterparts, over similar concerns about funding.

A neutral third party will arbitrate all matters that remain in dispute between U of T and CUPE 3902, according to a statement on U of T’s website.

CUPE 3902’s lack of progress in negotiations with U of T was found to be “unconscionable,” said Ahmed.

“What our friends at U of T were asking for were very reasonable demands,” said Ahmed.”They were not approaching the types of demands around tuition fees and rollbacks that we’re requiring.”

“Binding arbitration will hopefully help the union over there,” he added.

The labour disruption at both schools has resulted in the cancellation of classes near the end of the academic calendar.

Students are most affected by the universities’ strikes, said Sid Ryan, president of the Ontario Federation of Labour.

“Classes get disrupted for students and that’s not a good thing,” said Ryan. “Nobody wants that.”

Meanwhile, U of T classes have already resumed.

Here’s an infographic with more details about York and U of T strikes: