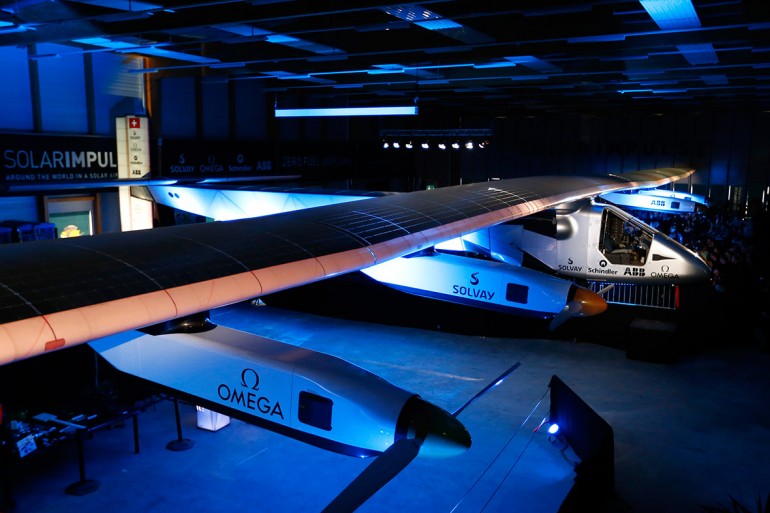 Solar Impulse II is seen in a hangar in Payerne, Switzerland. The new solar powered aircraft weights 2.4 tons with a wingspan of 72 metres and has more than 17,000 solar cells (Reuters)

The solar powered aircraft, Solar Impulse 2, is aiming to be the first plane to make a full, round-the-world flight using only energy from the sun.

Founder and pilot Andre Borschberg, along with co-pilot Bertrand Piccard will be making the journey together.

Beginning in Abu Dahbi, the pair will be making 12 stops altogether to break up the trip, with landings in Oman, India, Myanmar, China, Hawaii, Phoenix and New York.

The aim is to complete the journey at the very spot they started.

The trip is expected to take around five months, with 25 flight days spread throughout.

The plane will be cruising an average speed of 45 km/h.

According to their website, the plane itself is covered in 17,248 high-efficiency solar panels spread over a 72-metre wingspan that will charge the four electrical motors used to power the planes propellors.

The lithium batteries that provide the plane’s energy are able to store the energy received from the solar cells and allow the plane to fly at night. The craft is made of super-light materials, and weighs in at only 2,300 kg. A Boeing 747, in comparison, weighs nearly 80 times as much.

The potential for solar powered flights of this length is exciting news.

Bryan Koivisto, of the Koivisto Lab for Advanced Solar Design and Innovation out of Ryerson University, told Humber news in an email Monday that this is a big step.

“It is an exciting time for solar energy, and this flight is an ambitious attempt to show that not even the sky is the limit any longer,” he said.

The hardest legs of the journey will be the 5 days of non-stop flying required to make it across the Pacific and Atlantic oceans. Both pilots will take 12, 20-minute naps for each 24-hour block, and have goggles equipped with flashing lights to wake them up.

While there is no standing room in the cockpit, the seats recline and have a removable cushion for when they need to use the bathroom.

The cockpit is not pressurized, meaning the crew will have to endure sometimes freezing temperatures and will be wearing arm bands that allow mission control to keep tabs on things like blood pressure and oxygen level.

Those interested in keeping up with the journey can track the plane’s progress on the Solar Impulse website.