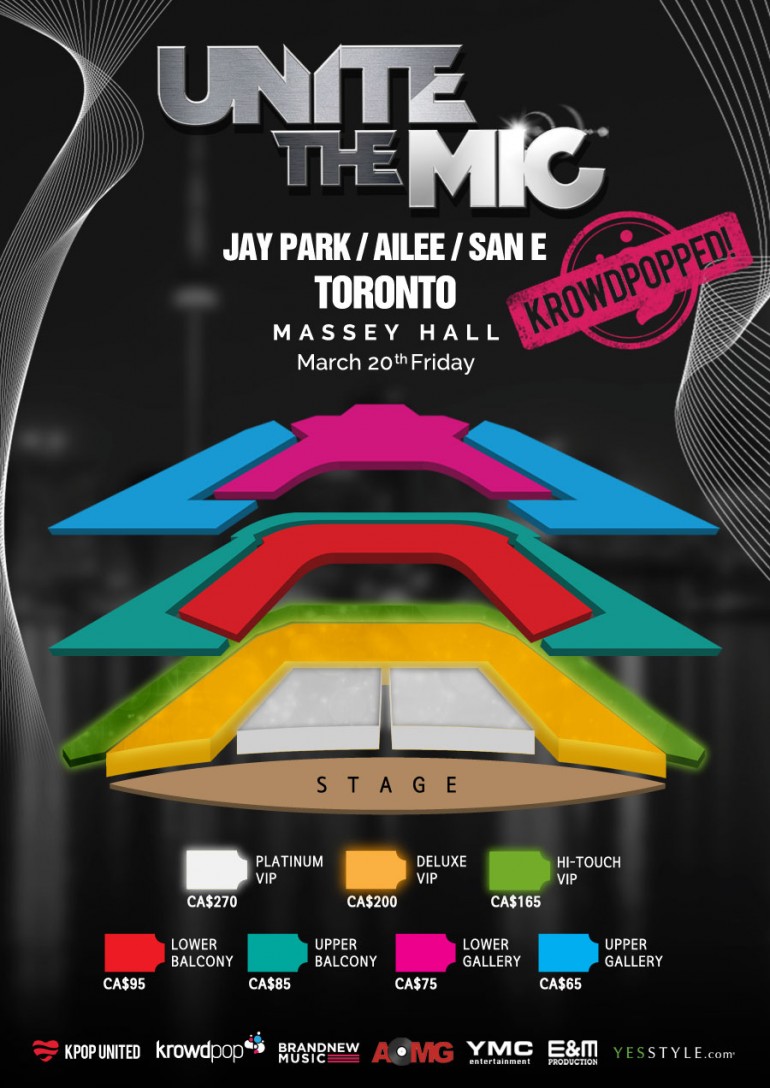 Crowdsource site Krowdpop has confirmed Toronto as a venue for the 2015 Unite the Mic tour.

South Korean soloists Jay Park, Ailee and San E will be performing at the event and meeting fans at Massey Hall.

KPOP UNITED, which formed in 2012, created Krowdpop is the world’s first crowdsourcing platform for K-pop concerts across the globe.

Fans can visit the Krowdpop website and enter which artist they want to see in their city, then gather a group of friends who also want to see the artist, and vote for a chance to have that artist in their city.

“There’s a lot of international K-pop fans that like to see more shows, but as K-pop is kind of new to the international scene, there’s been a disconnect with what’s been happening in terms of promoting, knowing who to cast and the cities,” said Richard Choo, founder and CEO of KPOP UNITED and Krowdpop.

Toronto has been a hot spot for South Korean entertainment labels to hold auditions, such as the upcoming joint audition by LOEN Entertainment and Starship Entertainment on April 4.

But Toronto has not been listed as a venue for many world tours such as Big Bang, Beast, 2NE1 and Infinite.

Five-member girl group Wonder Girls, and singers of song “Nobody,” however, did have Toronto on their 2012 world tour, but only American venues on their 2010 world tour.

“Promoters have a lot of problems around who’s going to do well, who’s going to sell out a show just to make it profitable, if not, break even,” Choo said.

Many of the organizers from Krowdpop  also organize other large scale events such as the Mnet Asian Music Awards, alternatively known as MAMA, held in Macau last December.

Choo said the Unite the Mic concert is the second through Krowdpop, after six-member boy band Teen Top came to Toronto in August 2014.

The Toronto concert has been confirmed for March 20th at Massey Hall at 7:30 p.m. Choo said it is the only venue confirmed for the tour so far.

Gaby Tatad, 23-year-old George Brown College student, had the chance to attend the SMTown Live concert in Los Angeles  in 2010 and their 2011 concert in New York City, since there were no concerts happening in Toronto.

She said her tickets for the Los Angeles concert were $90 CAD, and $300 CAD for premium seats in New York City.  For the Toronto  Unite the Mic concert tickets are going for $65 to $270.

Tatad said she thinks Krowdpop is a great idea.

“Fans now have the power to make things happen, granted that enough fans” have voted for the concert and the idols, said Tatad.

Some K-pop artists have come to Toronto for smaller scale events such as the 2012 Canadian Music Week with K-pop artists APink, Teen Top, G.NA, Brian Joo and a few K-rock groups.

Tickets are still on sale on Krowdpop’s website, but prices will go up at after 11:59 p.m. Thursday. Unite the Mic has sold 1,286 tickets as of Monday.

According to Krowdpop’s Twitter, at least 1,500 tickets are needed to sell to have a special event on top of the concert.

Background and Canadians in K-pop

The Hallyu Wave is the name of the influence of South Korean pop music across the world.

South Korean pop music, commonly known as “K-pop”, has been an international trend. While Psy’s “Gangnam Style” was the hit that topped music charts in 2012, other artists in South Korea have been hailed as the kings and queens of K-pop music.

Every year, hundreds of idol-hopefuls debut under South Korean entertainment labels after years of training in dancing and singing or rapping. Some of these hopefuls visit entertainment companies on a weekly basis for auditions, while some artists were cast in overseas auditions.

In 2010, Vancouver native G.NA, whose birth name is Gina Jane Choi, joined the K-pop scene as a soloist under Cube Entertainment.