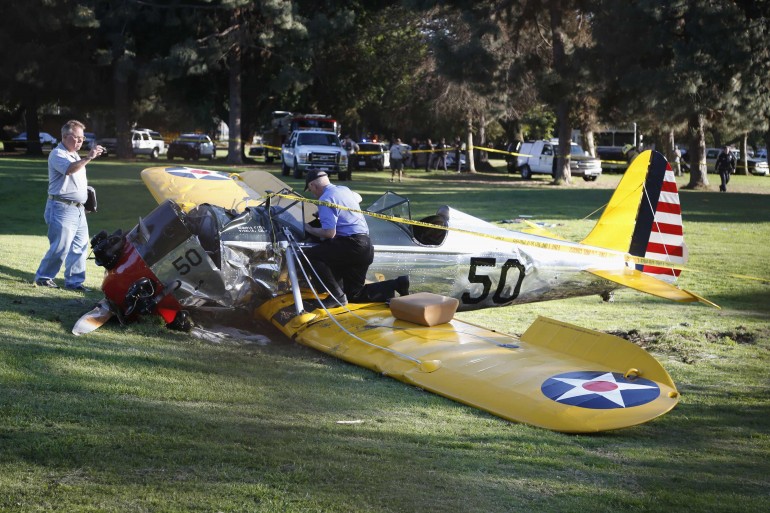 Harrison Ford escaped major injuries in a plane crash Thursday, when he was unable to make an emergency landing after engine failure.

Ford, 72, was reported to have undergone surgery for a broken ankle and pelvis. He also suffered multiple gashes to his head and cuts to his arm.

At the time of the crash, Los Angeles Assistant Fire Chief Pat Butler told the Associated Press,  it wasn’t clear whether or not the actor had suffered any internal injury.

However, Ford’s publicist said in a statement that the actor is in the hospital receiving medical care and is expected to make a full recovery.

According to the Daily News, Ford was flying a World War II-era plane when it lost engine power 20 minutes after takeoff from the Santa Monica Municipal Airport.

He was making an immediate return before the engine failed and the plane crashed into a golf course close to the airport.

No one at the scene at the Penmar Golf Club in Venice, Calif. was hurt,  but the front of the plane was badly damaged.

According to NBC News, a source said Ford actually “saved several lives” by avoiding homes in nearby suburbs and preventing the plane from going into a nose-dive after hitting a tree on its way down.

The plane Ford was flying is a yellow 1942 Ryan Aeronautical ST3KR, according to USA Today.

The famed actor, who has held a commercial pilot licence since 2002, was the only one controlling the plane which has two open cockpits.

Ben Ford, the actor’s son, said on Twitter that he was at the hospital and his dad was “battered, but ok!”

At the hospital. Dad is ok. Battered, but ok! He is every bit the man you would think he is. He is an incredibly strong man.

Thank you all for your thoughts and good vibes for my dad. — Chef Ben Ford (@ChefBenFord) March 6, 2015

This wasn’t the first time the Star Wars actor had an aircraft issue.

In 1999, Ford, and his flight instructor, were involved in a helicopter crash north of Los Angeles.

The chopper went down, landed hard and rolled over. Neither of them suffered any injury, although the helicopter was badly damaged.