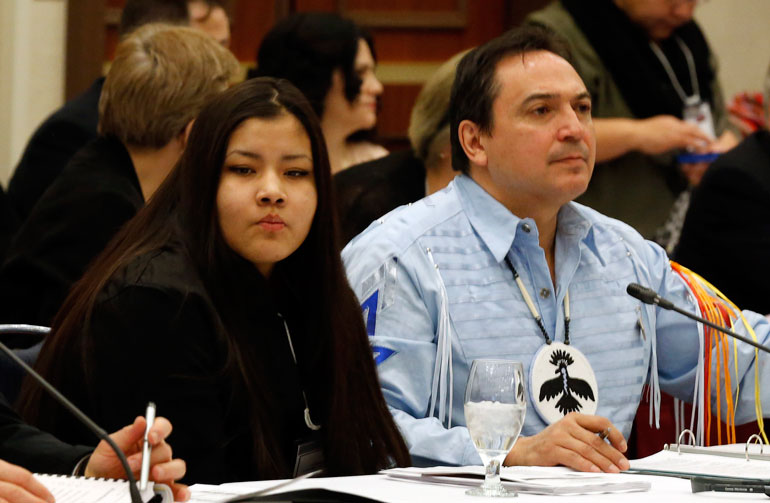 Members of Aboriginal communities wait for the start of the National Roundtable on Missing and Murdered Indigenous Women and Girls, with the Assembly of First Nations National Chief in Ottawa. (REUTERS)

Aboriginal communities continue to put pressure on the federal government to take a stand on the issue of missing or murdered Aboriginal women.

Several Aboriginal leaders and provincial premiers met at a roundtable discussion in Ottawa on Friday to discuss the ongoing issue. Families of the missing or murdered women supported the roundtable with a presentation to the government.

“The government doesn’t really have any insight as to what happened to those girls,” said Olivia Smith-Saucher, cousin of Shannon Alexander, an Aboriginal woman who has been missing for seven years.

Indigenous women make up 4.3 per cent of Canada’s population, but account for 16 per cent of female homicides and 11.3 per cent of missing women, according to Statistics Canada. Forty per cent of murder cases involving Aboriginal women and girls remain unsolved.

The federal government has been accused of ignoring reports of missing Aboriginal women. NWAC, the Native Women’s Association of Canada, shows research that indicates Aboriginal females make up an astounding 10 per cent of all female homicides nationwide.

Shannon Alexander and Maisy Odjick are two of those missing women.

The two are from the small Algonquin community in Maniwaki, Que., and they’ve been missing since September 2008. Alexander was 17 at the time and Odjick was 16.

Now, seven years later, their families are continuing to grieve, said Smith-Saucher, the cousin of Alexander and member of the Kitigan Zibi tribe in Quebec.

“The police and the government don’t seem to have much care for the issue,” she said. “That’s the worst part of this whole thing. It shouldn’t have taken this long for the missing (women) to get attention.”

Worries about who pays attention

Friday’s roundtable discussion included federal ministers and provincial premiers. Smith-Saucher said although many news networks were paying attention to the roundtable, many key members of the federal government were not.

“That bothers me a lot,” she said. “The First (Nations) people of this country aren’t getting anything done about people who are missing- even for people who have been (missing) for years on end. Any time the media involves a First Nations person, the government seems to sweep it under the rug.”

Many Aboriginal women can end up at risk because their communities are poorly regulated, said Craig Waboose, a 24 year-old Aboriginal student at Humber College.

“These women come from small communities where there are not many opportunities for them to advance in their education, career or family life,” he said.

Waboose also said Aboriginal communities are very different from most municipalities.  According to Statistics Canada, nearly half of the Canadian First Nations people have lived on a reserve or settlement.

“When these women go out to a big city, they are obviously overwhelmed with so many options,” said Waboose, who’s also involved with Humber’s Aboriginal Resource Centre. “With that being said, many women may come across a bad experience or bad opportunity because their community is so secluded. It’s a very different life from what most Canadians know.”

A process is underway to find the missing Aboriginal women.

According to the RCMP website, The National DNA data bank act was created in 1998 to help solve some of these mysteries and lower the number of missing First Nations women in Canada.

A DNA databank is set to begin running in 2017. It’s expected to use genetic markers which would identify missing or murdered people much faster than current DNA forensic testing technology.

If Aboriginals from different places in Canada were to be tested, the databank could put names to the nameless quickly and cost-efficiently.

Many human rights organizations have said the feds should be taking more action in addressing the missing women.

“The government doesn’t really have any insight as to what happened to those girls.” – Olivia Smith-Saucher

Berton-Hunter said Thursday’s report by the Women’s Legal Education and Action Fund shows that the federal government has ignored 58 reports and 800 recommendations to take action on missing or murdered Aboriginal women.

“There are many women who’ve died or gone missing and we’ve been calling for this since 2004, so it’s been 10 years,” said Berton-Hunter. “We need to move forward with some recommendations other than talking and not doing anything. These are really serious problems for families and communities across Canada.”

Dealing with missing Aboriginal women is a grey area for the federal government, said Berton-Hunter.

“The government has said that they would only look at criminal matters- they would not do anything about the missing people at a federal level,” she said. “However, indigenous people are a federal responsibility, so that’s a problem. A lot of laws affecting Aboriginals are attached between the two areas of jurisdiction.”

The number of missing or murdered women widely differs from province to province.

Aboriginal Peoples make up only 13.6 per cent of the province’s total population, and 59 per cent of all missing women and girls in Saskatchewan are Aboriginal.