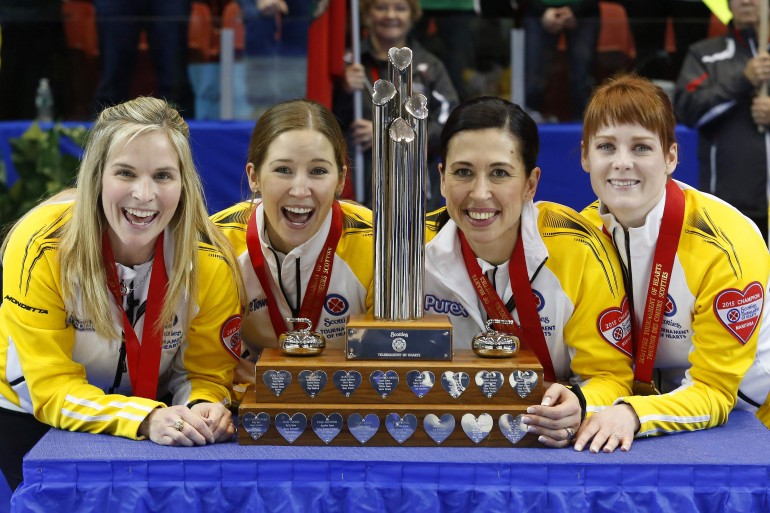 Jennifer Jones and her team swept away any doubts of their dominance at the Scotties Tournament of Hearts in Moose Jaw, Sask. on Sunday night.

The 40-year-old skip was named event MVP and captured her fifth Scotties title after defeating Alberta’s Val Sweeting in a close championship game by a score of 6-5.

Both teams were locked in a tight game that was decided by Jones’ winning stone in the 10th end in front of a crowd of 3,992 spectators at Mosaic Place.

The Scotties gold marked Jones’ first title at the tournament since 2010.She returned to Scotties finals in 2011 and 2013 but lost to Saskatchewan’s Amber Holland and Ontario’s Rachel Homan, respectively.

However, Jones bounced back and lead her squad to an Olympic title in Sochi, Russia and became the first-ever female skip to go undefeated in an Olympic tournament.

“(Jones) definitely has a lot of experience so I’m not surprised that she brought her game this week and won the Scotties,” said Sarah Jagger, a former curling all-star at Humber College.

“They were working really hard last year before they were going to the Olympics,” Jagger said. “That definitely helped the team dynamic to get to the (Olympic) gold medal game and win the Scotties.”

The dominance of Jones’ squad is only paralleled by the skip’s approachability to fans and younger curlers.

“She signs every autograph, talks to every fan, and plays with joy on the ice,” said Al Cameron, Director of Communications and Media Relations of the Canadian Curling Association. “Clearly, that hard work pays off and I think that’s a powerful message to send to young curlers.”

Grace Esquega, a former teammate of Jagger’s, told Humber News that she develops her own curling tactics by watching Jones on televised games.

“When I watch (Jones), I really focus on her strategy and see how the end turns out for her if she does these certain shots and throws up a guard here or there,” said Esquega, who is the skip of the current Humber Hawks women’s varsity curling team.

Jones’ latest victory moves her into second place for most Scotties titles behind Canadian Hall of Famer Colleen Jones, who has claimed six championships of her own as a skip.

“(Jennifer Jones) is the best curler in the world, the best skip and the best strategist,” Esquega continued. “(Jones’) strategy is working for her… Hopefully I can bring that into my game as well.”

With this year’s Scotties title under their belt, Jones and her team will represent Canada at the world championship next month in Sapporo, Japan.