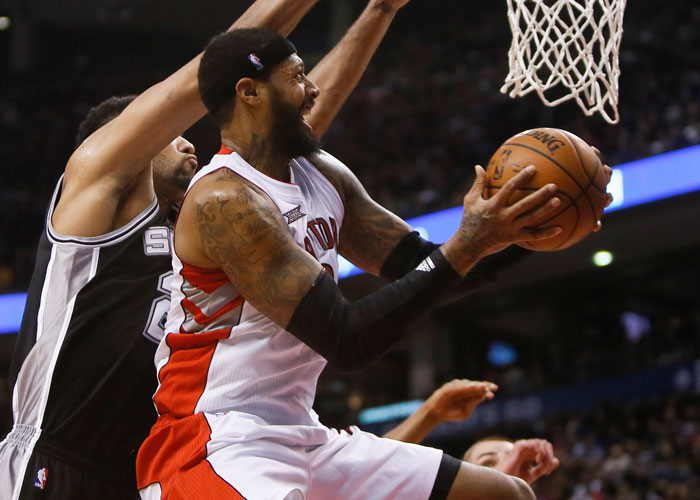 James Johnson drives to the basket during the Raptors 87-82 victory over the San Antonio Spurs. (Reuters)

Toronto Raptors fan favourite James Johnson reemerged as a key member of the rotation helping the Raptors to their most recent win against the San Antonio Spurs.

After dealing with limited playing time and an injury over the past few weeks, Raptors head coach Dwane Casey inserted Johnson into the starting lineup Sunday night.

Casey’s gamble paid off as the Raptors squeezed out an 87-82 win over the Spurs.

The small forward led the Raptors with 20 points making eight of 10 field goal attempts. Johnson’s biggest basket came in the final minute against the Spurs when he sank the go-ahead basket from beyond the arc.

Smart move by Casey, putting (Johnson) back in the starting lineup,” said Walder. “It was obvious that Greivis Vasquez at shooting guard paired with Kyle Lowry in the backcourt was hindering the defense.”

Won’t be easy for Casey to get JJohnson out of the starting lineup now … follows up his strong showing vs. LAC w 20 pts/4 reb vs Spurs

It was a second straight strong performance from Johnson, who was coming off another notable game in the Raptors’ 123-107 victory over the Los Angeles Clippers on Friday. He posted 16 points, five rebounds, three assists, and two steals while making all seven of his field goals in just 19 minutes of playing time off the bench.

Walder said the Raptors were in sore need of a change after starting their February schedule on a sour note losing consecutive games to the Milwaukee Bucks and Brooklyn Nets.

James Johnson isn’t sure if this win builds confidence? Maybe not for the players, but the fans certainly have a little more spunk now. — Christopher Walder (@WalderSports) February 9, 2015

“I think Casey has finally figured out a way to use (Johnson) without hindering everyone else,” said Walder. Casey tweaked his starters in January when he replaced small forward Terrence Ross with Vasquez in the starting lineup.

Johnson was glued to the bench when he was listed as DNP-CD (did not play – coach decision) in a 92-89 victory against the Milwaukee Bucks on Jan. 19 and again on Jan. 27 when the Raptors defeated the Indiana Pacers 104-91.

The likelihood of a big return to the Raptors’ rotation against the Clippers seemed bleak after Johnson missed four straight games with a hamstring injury.

James Johnson checks in and the fans are HAPPY to see him.

At The Buzzer News basketball analyst Akim Burke told Humber News that he was stunned by Casey’s decision to start Vasquez at the expense of Johnson’s playing time. “(Johnson) is a guy that fills all the holes and the deficiencies that both the starting group and the group coming off the bench have,” said Burke.

He said the 27-year-old six-year pro has handled his up-and-down minutes with a team-first approach.

“I think you can see that in his effort on the floor as well that anytime his number is called, he’s always ready to come in and contribute,” said Burke. “The James Johnson from before was a little bit more concerned about his own game, his own points and his own minutes.”

Despite dealing with erratic playing time this season, Johnson remains a favourite among Raptors fans and has inspired basketball apparel with his background in martial arts.

The Raptors will continue to deal with a grueling February schedule full of elite opponents so Johnson’s resurgence couldn’t have come at a better time. Toronto will host the Washington Wizards on Wednesday night.