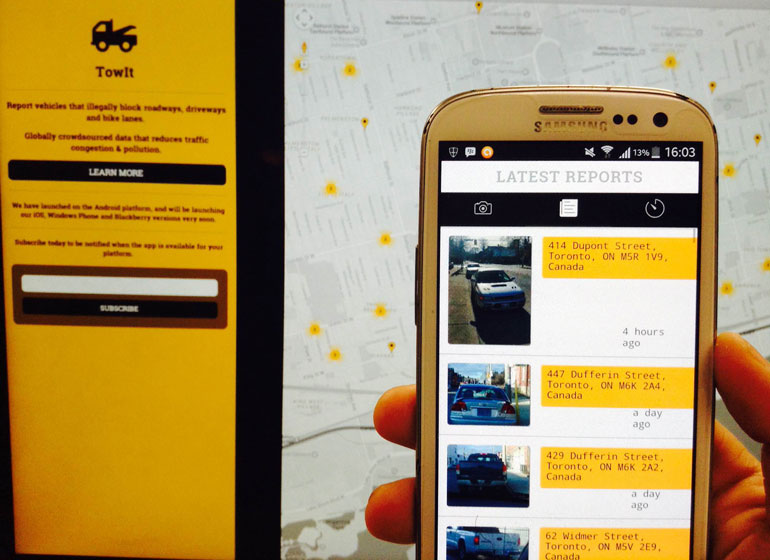 Toronto Mayor John Tory’s zero-tolerance approach against illegal parking could get a boost from TowIt, an app created by a small team of developers who are aiming to eradicate the city’s gridlock problem.

Users of the app can upload a photo of a parking offender’s vehicle and the license plate number to the TowIt website.

The website provides a map of illegally parked vehicles across the city that can be checked by nearby parking enforcement officers.

The crowdsourced app was released on Jan. 16 on the Google Play store with more than 200 vehicles photographed and uploaded onto the TowIt website.

However, the concept of the TowIt has evoked mixed reaction from drivers.

Illegally parked vehicles are a common sight in Toronto and irritating to drivers who abide by the law, said Jennifer Nguyen, a second-year student from the University of Guelph-Humber.

“It frustrates me when they’re blocking my way,” said Nguyen. “Especially when I’m doing right turns and there’s a car parked right at the intersection and they’re not supposed to be there.”

Nguyen noted that her mother has regularly called the police to report illegally parked vehicles near their home and could use TowIt to expedite the process.

“She takes a picture of the car, but she doesn’t have anywhere to put it so she calls the police,” said Nguyen.

Branden Baltjes, also a second-year student from the University of Guelph-Humber, voiced his concerns about the potential issues with TowIt.

“If you’re taking pictures (of illegally-parked vehicles) with your phone, it could cause a lot of privacy issues. It’s really disturbing that you can take photos of people’s license plates,” said Baltjes.

TowIt will be rolled out to iOS, BlackBerry, and Windows mobile devices to expand its user base.