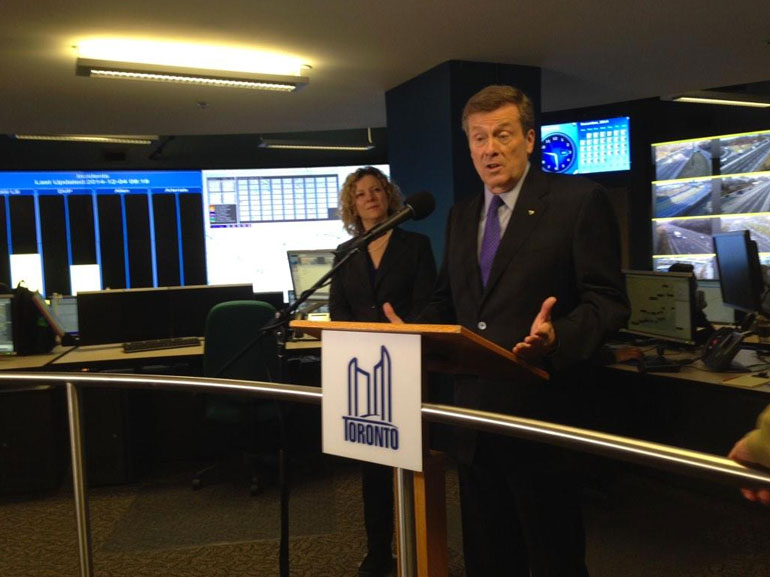 On his fourth day in office, Tory spoke to media in the city’s Don Mills Transportation Operations Centre alongside new Public Works Chair Jaye Robinson and outlined a six-point plan he says is designed as a quick remedy to the city’s traffic congestion issues.

The plan includes towing for cars blocking lanes on major traffic routes, starting Jan. 1. “You will be towed,” he said. “If I have to chip in and drive a tow truck myself, you will be towed.”

Tory announced he’ll chair the city’s road closure committee for the next six months in an attempt to improve the tactfulness and timing of closures.

He gave an example of the weekend shutdown of the Gardiner Expressway for routine fall maintenance although there were four home games scheduled that weekend between Toronto sports teams.

“It’s insensitive and it can’t have any part of life in Toronto,” the mayor said.

Tory’s plan also tackles construction. He promised to speed up public construction with extended work hours and attach more stringent criteria on private construction, which is responsible for many road closures.

Tory says increasing fees for private developers will “attach a real price” to the length of a construction project and encourage faster progress.

The mayor also vowed to do away with older practices such as communication for road closures by fax. There was no mention of public transit in the speech.

Torontonians are taking to Twitter to voice their opinions.

None of which will do any good w/o congestion tolls. @globeandmail: John Tory unveils 6-pt plan for tackling gridlock http://t.co/IarP8NkoS0