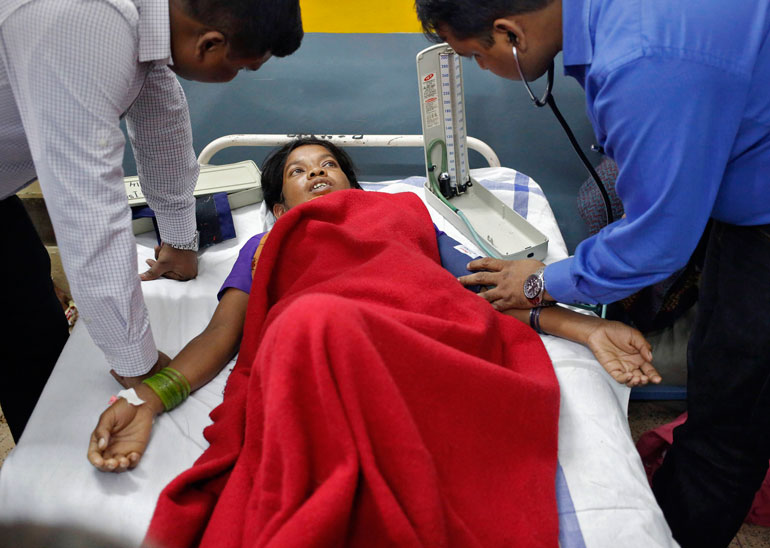 Doctors tend to a woman, who underwent a sterilization surgery at a government mass sterilization “camp”, at Chhattisgarh Institute of Medical Sciences (CIMS) hospital in Bilaspur district, in the eastern Indian state of Chhattisgarh, November 13, 2014. PHOTO Reuters

South Asian doctors are defending female sterilization as a safe and effective means of birth control despite the deaths of 13 women who has botched procedures.

“This is a recent occurrence which is previously unheard of,” said Dr. Yawar Saeed, a consulting general surgeon at Al Dhaid Hospital in the United Arab Emirates. He had performed sterilization surgeries in Lahore, Pakistan under a similar governmental program.

“It is an extremely safe method,” Saeed told Humber News through a translator. “Sixty to 65 per cent of Indian women undergo the procedure and deaths are very uncommon.”

But another doctor, Rashid Chak, a general practitioner who worked in mobile hospitals in northern India from 1982 to 2013, said doctors must stop performing these surgeries in mobile units.

“The facilities are inadequate and will keep causing deaths unless measures are taken,” he told Humber News through a translator.

Chak said to prevent this from happening again the government needs to push this procedure into intensive care facilities where they have the means to treat patients who go into shock or need additional care.

Saeed said female sterilization has been widely practiced in India since the 1970s and is the country’s most common method of birth control.

Relatives of a woman, who died after she underwent a sterilization surgery at a government mass sterilization “camp”, take part in her funeral rites at her home in Bilaspur district, in the eastern Indian state of Chhattisgarh, November 13, 2014. PHOTO Reuters

“Most women prefer tubal litigation because the results for this are more reliable than other forms of birth control,” he said.

The women who died following the procedure had the surgery done last Saturday at a mobile hospital outside Bilaspur city in the central Indian states of Chhattisgarh.

“There was one doctor and one assistant operating on 82 women there and that’s why it happened,” said Chak. “There was no one following up.”

He said international safety rules say that patients who receive narcotic sedation must be monitored by an anesthesiologist until they fully recover.

Saeed said although autopsy results showing cause of death for those 13 women who died are not yet complete, the drugs are likely to blame.

Pethidine is used for sedation along with a local anesthetic, he said.

“There may have been an overdose involved or a reaction to the sedatives,” he said. “The medicines can cause respiratory depression which can lead to sudden brain damage and death.”

Female sterilization is endorsed by the government of India, said Chak.

“Doctors using this method are being compensated by the government to push the method and they get a commission per procedure,” he said. “It was probably a UN program because this method is used all over South Asia.”

“They motivate women to have the procedure done for means of population control,” he said.

Men are not encouraged to get sterilized because there is a general misconception that it causes impotence, Saeed said.