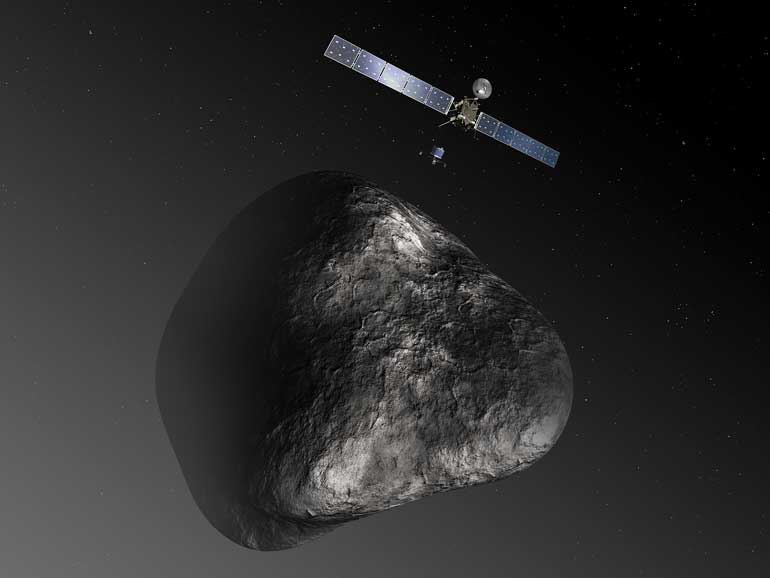 For the first time in human history, an object made on Earth has touched down on a mid-flight comet.

The European Space Agency announced Wednesday it successfully landed a probe on the surface of Comet 67P/Churyumov-Gerasimenko as part of its Rosetta mission.

“After more than 10 years traveling through space, we’re now making the best ever scientific analysis of one of the oldest remnants of our Solar System,” said Alvaro Giménez, ESA’s Director of Science and Robotic Exploration on their web site.

“Our ambitious Rosetta mission has secured a place in the history books,” ESA’s Director General, Jean-Jacques Dordain said. “Not only is it the first to rendezvous with and orbit a comet, but it is now also the first to deliver a lander to a comet’s surface.”

ESA’s Philae Lander (pronounced ‘fee-lay’) spent seven hours making its decent to the surface. A far cry from the 10 years and more than 6 billion kilometres travelled by the Rosetta space craft to get it there.

The agency confirmed Philae’s deployment at 9:03 a.m. GMT (4:03 a.m. EST) when Rosetta was 22.5 kilometres from the comet’s centre. The lander took images and recorded information throughout the seven hour descent.

This video shows a rendering of how the operation was meant to take place.

ESA said images taken from Rosetta prior to Philae’s approach showed 67P’s surface as being riddled with boulders, cliffs, precipices and pits as well as jets of gas shooting from within.

Stephan Ulamec, Philae Lander manager at the DLR German space centre, said every bit of information takes around 28 minutes to travel from the Philae to Earth.

It was at this time and from these images that they decided to land on Agilkia, located “on the head of the bizarre double-lobed object.”

Unfortunately for mission command, Philae’s landing didn’t go quite as smooth as ESA had depicted in its video.

Philae, having made the decent without the aid or propulsion or guidance systems, sent back information saying it had bounced twice. ESA said the lander ultimately came to a rest in the shadow of a cliff.

Philae had been meant to land at a speed of around one metre per second with its three legs absorbing much of the initial impact. Each leg was also equipped with an “ice screw” that was meant to fire into the surface upon landing.

The screws failed to fire.

“We bounced two times and then finally stopped in a place where we have not entirely located but we sort of get close to the place where we are, where we think we are, which is not very close to the one we wanted to, but not very far away,” said Jean-Pierre Bibring, ESA’s lead Lander Scientist in today’s press conference.

Ulamec said figuring out its current location is made more difficult by that each bounce took the craft another kilometre further from the target.

He also said that the screws’ failure to fire has also made it more difficult to maneuver Philae into a better setting.

“One of the greatest uncertainties associated with the delivery of the lander was the position of Rosetta at the time of deployment, which was influenced by the activity of the comet at that specific moment, and which in turn could also have affected the lander’s descent trajectory,” said Sylvain Lodiot, ESA Rosetta Spacecraft Operations Manager on the Agency’s site. “Furthermore, we’re performing these operations in an environment that we’ve only just started learning about, 510 million kilometres from Earth.”

This video from ESA shows the sights and sounds as they first began to receive the information themselves as well as the press conference from today.

Philae is currently silent at the time of publication.

The lander is busy collecting all the data it can during a time window where communication with it is impossible.

Ullamec said the communications link between Philae and Earth should be re-established around 7:22 p.m. GMT (2:22 p.m. EST). It is at this point when much of the first data will be transmitted home.

Philae will conduct its primary science mission over the next few days. If conditions allow, a secondary mission could follow.

“Many of the other instruments have already acquired what they wanted to,” said Bibring.

The secondary mission is hinged on the use of solar panels on board Philae to recharge a secondary battery. Unfortunately, ESA said the lander’s current location could hinder that secondary mission as it appears to be resting in a shadow.

“We are not very illuminated,” Bibring said.

He said that because of the shadows, it’s hard to tell in Philae’s images what is shade and what is the blackness of space.

Bibring said ESA will try to reposition the lander so its panels can soak in more sun.

Much of Rosetta and Philae’s mission therefore remains in the air. But what is known for now, they certainly seem to have accepted they’re in this together.