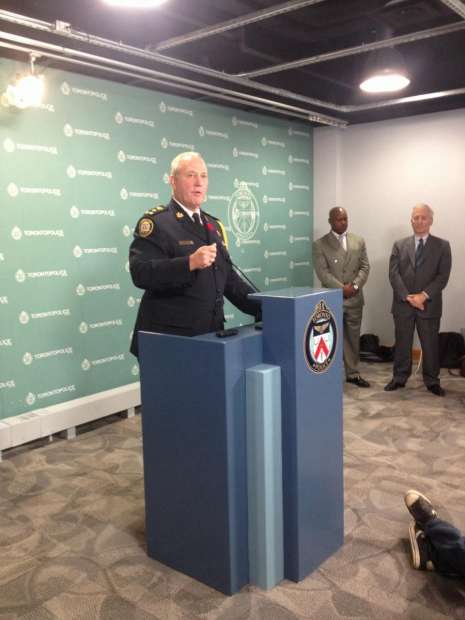 Toronto Police is still having a problem with “street checks” or “carding”, according to a survey that was presented this afternoon at its scheduled board meeting.

Police said in April it would study a new policy not to racially profile people in stop checks, but the survey taken in August shows it’s still happening.

According to the survey presented to the board today by Neil Price, executive director of LogicalOutcomes, a non-profit organization hired by the Police Board to conduct the survey, there are still long standing issues and wide spread dissatisfaction.

Of the 400 respondents in the survey,

However, Deputy Chief Peter Sloly said on CBC Metro Morning the survey was completed before the new policy was implemented.

“Mr. Price started his survey before we did our work in terms of producing a procedure for the officers that would allow them to operationalize the policy. So the work of Mr. Price has actually been done in advance of our changing the procedure,” Sloly said.

Police are still reviewing the proposed policy, he said.

“The officers are still working as diligently and as professionally as they can base on the existing rules,” Sloly said. “The new rules haven’t been passed down to them yet.”

Nevertheless, there have been positive changes in the way police interact with people, Sloly said.

“First of all there have been a 95 per cent reduction in the number of cards” across the city, he told the CBC. “That’s a significant quantitative change.”

However, Price said there is nothing wrong with the survey’s findings and the research can help in crafting new policy.

“What’s wrong with doing a study that establishes a base line and a community perspective? If I’m drafting procedures I want that information, I want to know what’s going on so that it informs my procedures,” said Price.

Two Humber College students said they had issues in the past with being stopped from what they said was for no reason.

After a trip to the LCBO Richard Batista was stopped on his way home.

“The police actually followed me, pulled me over and asked me for…I.D. I felt that was pretty random… I felt very uncomfortable. I’m not underage so…I didn’t think it was just,” he said.

Jeffrey Asiamaih said he was with his friends when he was stopped.

“I felt pretty uncomfortable ‘cause you know I didn’t think I was doing anything wrong at the time,” Asiamaih said.

Toronto Police Chief Bill Blair looked grim during the meeting, addressing the leak of the survey to the media and the response of Board Chair Alok Mukherjee.

Mukherjee told media outlets the results of the survey are “extremely disturbing and problematic.” He said that he and other members of the board need time to review the report.

“(There’s) a lot of information that all of us need to digest and reflect in order to grapple with what you have said,” Mukherjee told Price at the meeting.

The Toronto Police Services Board will be meeting on Nov. 26 at 12:30 p.m. to further discuss the findings in the survey.