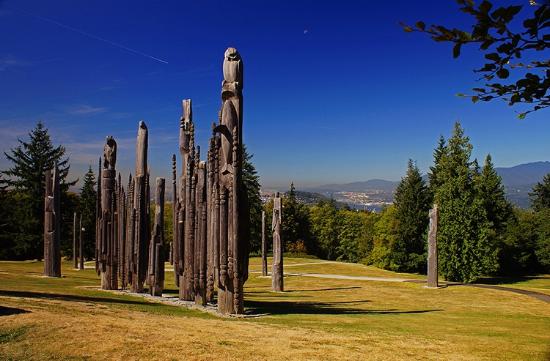 Totem Poles stand at the peak of Burnaby Mountain Park.

The fight over Burnaby Mountain still rages on like wildfire after a B.C. court threw out all civil contempt charges against protestors due to inaccurate GPS co-ordinates provided by Texas based oil company, Kinder Morgan.

The ruling by B.C. Supreme Court Associate Chief Justice Austin Cullen also dismissed an order to extend the injunction filed by the company to keep protestors off the private work site until Dec. 12, which means Kinder Morgan has to have the site in question cleared of excavation work by Dec. 1.

After a tumultuous two-month battle on the mountain, which houses not only residential communities, but also Simon Fraser University and a conservation area, Tamo Campos, co- founder of Beyond Boarding and grandson of David Suzuki says it is far from over.

“Kinder Morgan is one of 13 proposed oil and gas projects across this province right now,” said Campos. “This pipeline was running right through the city so it had a huge opportunity to mobilize an entire city and understand the issues not just about Kinder Morgan, but the tar sands and other pipelines that stem from it.”

Campos was arrested at the protests on Nov. 20 when he claims RCMP officers pulled him over the injunction line. He said he has no intention of being arrested.

“We had all lined up along the injunction line and they arrested one of the indigenous activists who was drumming, Dan Wallace, and then everyone was yelling ‘no pipelines on stolen native land’,” he said

The Environmental Movement is gaining a following in urban centers as pipeline developments get closer to home.

“That’s when they began to pull people out of the crowd from across the injunction line and they pulled three people all of colour across the line,” he said. “And we were the first ones to actually go to prison.”

Once word spread that the RCMP had arrested David Suzuki’s grandson, he received special treatment. He said at 9 p.m. guards released him, but only him.

Campos says that while his grandfather’s speech was fiery and his presence was welcome, the focus of the story shifted.

“Our media is almost obsessed with these kind of figures in the environmental movement instead of the fact that there was indigenous elders whose traditional territories on Burnaby Mountain were being taken away through court injunctions.”

Campos told Humber News that while in prison he witnessed medication being withheld from one elder, and that prison officials neglected to give Dan Wallace a blanket and told him it was a privilege to receive food in prison.

When these allegations were addressed with the RCMP, Staff Sargeant Major John Buis told Humber News that the cells are staffed by civilians, not RCMP officers but added that an RCMP officer often supervises the civilian jailers.

“The first day of the arrest really opened our eyes,” Campos said. “The environmental movement is also seeing the same struggles as racism and other forms of oppression and we really felt that that day on the mountain.”

Buis has been at the protest site since the beginning and said most of the protestors have been very co-operative.

“I was here every day that the protest was here. I was here when the injunction was served,” he said. “Initially there was some tension but there were no real confrontations – no assaults that took place – but there were some scuffles.”

He said the RCMP is not familiar with Tamo Campos and would not have arrested him or released him early because of his family.

“I’m not sure who he is,” said Buis. “But we do not treat people differently because of who they are.”

“If they feel that they’ve been treated improperly we want them to come forward to complain,” Buis said of the protestors.

Campos argues that the public needs to question the greater social role of the RCMP in cases like this.

“I think that goes into the use of the police in our society where they have been used continually through enforcement orders, through injunctions, to get indigenous people off their lands and have always sided with corporate interests over interest of local communities and the environment that supports them. “

With Kinder Morgan being ordered to evacuate the site by Dec. 1, Buis says the RCMP will uphold the law.

“The injunction says that we have to secure the area until Dec. 1, and that’s what we will be doing,” he said. “Past Dec. 1, unless there is a criminal act being committed we are no longer there.”