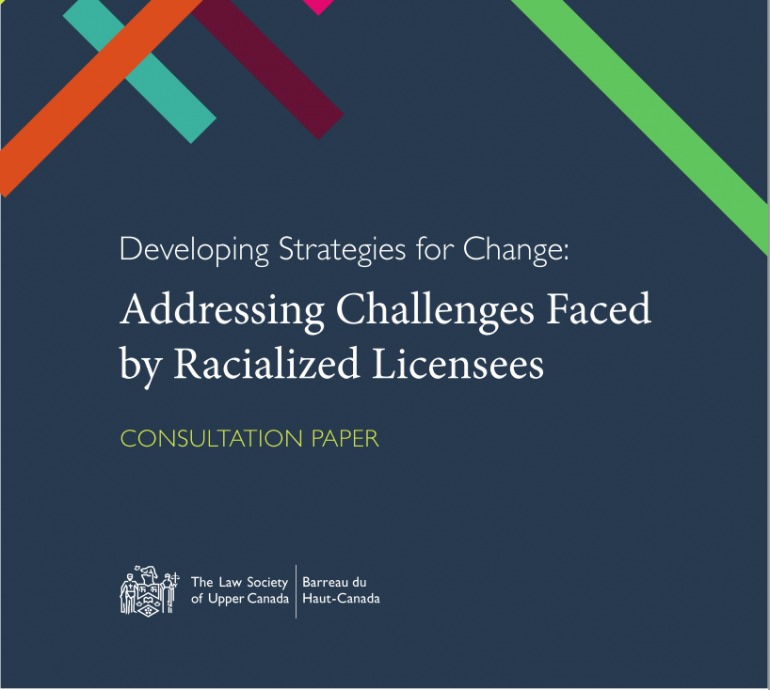 Systematic discrimination against racialized lawyers and paralegals is a reality that needs to be acknowledged, according to a report released by the Law Society of Upper Canada.

The report titled “Addressing Challenges Faced by Racialized Licensees” has been in the works since 2012 and contains some uncomfortable findings.

“Information obtained to date suggests that racialization is a constant and persistent factor affecting licensees during entry into practice and opportunities for career advancement,” the report stated.

Forty per cent of racialized lawyers and paralegals say their ethnic background or race acted as a barrier into the profession, compared to three per cent of white licensees.

Respondents to the study also reported being offered fewer opportunities as their non-racialized colleagues as well as being forced to work harder and suffer greater consequences for errors.

Many also reported being frequently mistaken for students, assistants, social workers or clients instead of lawyers or paralegals.

There has been a significant increase of lawyers of visible minorities in recent years. Seventeen per cent of lawyers in Ontario are not white, up from about nine per cent in 2001.

Trevor Farrow, chair of the Canadian Forum on Civil Justice and Associate Dean of the Osgoode Hall Law School, said it is important to note discrimination is a continuing  dilemma in all professions.

“I think racism and exclusion continue to be problems in all of society,” he told Humber News.

“We need to start with the premise that lawyers are not exempt from this problem.”

Farrow said while the legal profession has had “major challenges” in regards to diversity, he commended the law society for playing a major leadership role in investigating and combating inequity.

Farrow also said people should look at the successes in fighting discrimination over the years.

“If you look historically at this problem, it’s been a major problem,” he said.

Farrow pointed to the increasing numbers of women and people of colour in the legal profession, and to more progressive admissions policies and pedagogy being introduced in law schools.

The report also suggests that the intersection of race with other factors like gender, sexual orientation, disability and geographic location, among others, complicates the issue even further.

“Women are still working to be taken seriously in this profession and being a racialized women means that you often have even more to prove,” said one female respondent to the report.

Data from the report shows black lawyers disproportionately work for much smaller firms or enter a sole practice.

“(T)here are firms that believe if they hire black lawyers they will lose their clients,” said one participant.

The Law Society of Upper Canada is asking for feedback on its report and for input on how to respond to future reports of workplace discrimination.

The report did not include data on First Nations lawyers and paralegals. That information will be included in a separate report.