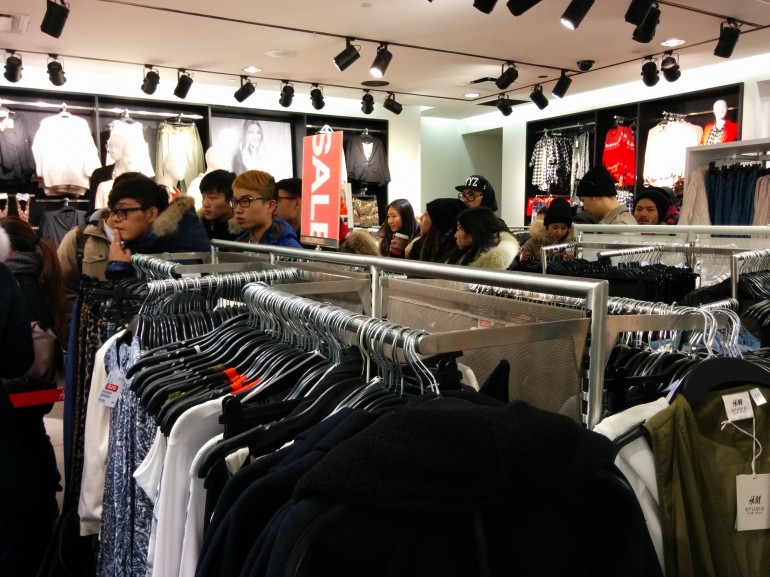 Fashionistas scrambled to fill their wardrobes with the newest exclusive designer threads without having to empty their bank accounts.

The Alexander Wang for H&M collection was launched globally Thursday morning and there was a lineup outside the Eaton Centre for more than 24 hours leading up to the release. Security was on hand to ensure things in the lineup outside the store stayed under control.

But when the doors opened at 8 a.m., shoppers went into frenzy running through the store, weighing themselves down with handfuls of exclusive Wang apparel to fill their closets.

“I don’t even know what I’m missing, but I think I got everything I came for,” said Edward Chu, 25, who was hunched over forward with his arms wrapped around a pile of clothes while waiting to cash out.

H&M has been doing designer collaborations since 2004 with international designers and style icons such as Karl Lagerfeld and Beyoncé to bring high fashion to those who can’t afford it. Wang is the tenth designer to do an H&M collaboration and was chosen because his designs speak to a younger demographic, said Emily Scarlett, spokesperson for H&M.

“He definitely has a huge voice in fashion right now,” she said. “I think he has a lot to say about street style and is, kind of, the fashion voice of today.”

“It very versatile and easy to wear,” said Caitlin McCann, who was one of the first customers to make it to the cash register. “It’s everyday apparel as opposed to the evening wear and the glitz and glamour. So I think everyone can wear this line which is pretty cool.”

“His aesthetic is clean lines,” said Jen Menecola, 27, who waited in line for two hours but worried there wouldn’t be anything left by the time she made it into the store. “And I wear a lot of black and his stuff is usually all black and white so that works for me and my wardrobe.”

Some of the most sought after items were the WANG sweatshirt, boxing gloves, leather backpack, and yoga mat, said Scarlett.

What shoppers were most excited about however was the price tag.

“I spent $870 and got six items,” said Johnson Lau, 18, who was one of the first in line Wednesday morning.

The collection was priced from $19.95 for an accessory to $399 for clothing items, said Scarlett.

“People shop in time increments to keep it democratic and to make sure as many people as possible get a chance to shop the collection,” said Scarlett.

Groups of 30 shoppers were given 10 minutes to shop and then staff would have five minutes to restock and clean before the next division of buyers pounced, she said.

With time on the clock however, shoppers rushed through the display pulling accessories off shelves and tearing clothing off racks.

The collection was not replenished and is designed to sell out in a few days in order to retain the value of the brand, said Scarlett.