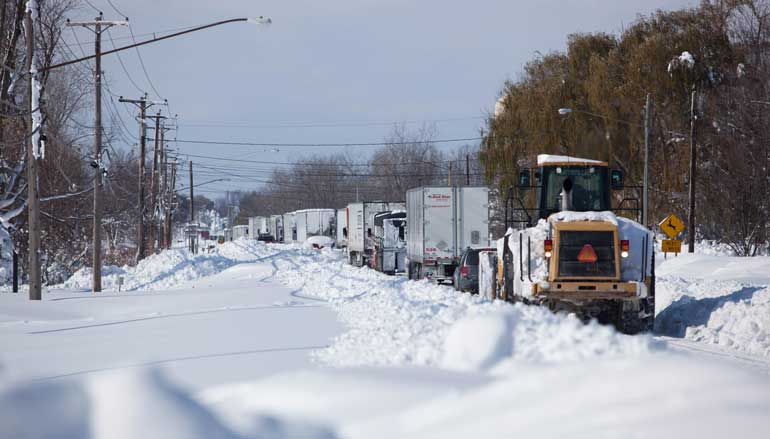 Southwestern New York hit by ‘wall of snow’ in early winter storm that took many off guard.

Buffalo is dealing with an intense snow storm that’s set to continue until the weekend. Image via Anthony Quintano. Flickr.

Buffalo and much of southwestern New York is in crisis mode today. The National Guard has been called in to help deal with the blanket of snow that has killed at least eight people and brought the region to a standstill.

The devastating impacts of the storm were felt state-wide.

Another man died after being pinned between two cars. He was attempting to push one of the vehicles through the snow.

Other deaths have been contributed to cardiac arrest believed to have come as a result of shoveling snow.

“It’s very difficult because this is a community that prides itself in dealing with snow emergency situations and they really do have a great plan,” said Eileen Buckley, a senior reporter at WBFO radio in Buffalo.

Buckley said the amount of snow that’s fallen in the past couple of days is unprecedented, and there’s even more on the way.

“When you get more than five feet (1.5 metres) of snow, that’s pretty huge to tackle,” she said.

She said this storm seems to have even carried more snow with it than compared to the blizzard that passed over the city in 1977.

Buckley said that while the ’77 blizzard came with harsh winds that caused high drifts, she said the snow banks in this storm were created simply due to the massive snow dump.

“There’s a lot of people that have been stranded in their homes that can’t get out because they haven’t seen snow plows yet,” she said.

Buckley said the plows are being prioritized in a sense to remove the snow from the most critical areas first.

The storm forced officials to close a 212 km stretch of the New York Thruway, a major point of passage for state-wide transit.

Buckley said emergency crews were going car to car to make sure the people inside were safe, but were unable to remove all of the drivers and passengers and actually transport them to safety.

She said many other vehicles remain abandoned on roads and highways.

Buckley said a man contacted the WBFO newsroom after having been stuck in his car for more than 30 hours. He had been traveling from Washington D.C. to Toronto.

“There’s still some emergency situations,” said Buckley. “There’s many travel bans in the south towns of the city of Buffalo and the suburban areas south of the city and they’re urging many people to just try to stay off the roads and avoid those areas as they try desperately to remove this snow.”

Buckley said she’d spoken with Brown who told her it felt like they hadn’t even made a dent in what he called a “wall of snow.”

She said although the city is normally quick with snow removal, this storm has proven more difficult by the need to remove the snow to outside locations.

The National Weather Service issued another lake effect snow warning early this morning covering Erie, Genesee and Wyoming counties. Metro Buffalo is once again in the path of the storm.

The warning says the snow is expected to continue through to 6 a.m. accumulating more than two feet throughout the day with another 12 to 25 cm (five to 10 inches) at night.

The NWS says this storm “will result in very difficult or nearly impossible travel at times.”

They also say the snow will be accompanied by thunder and lightning and warn even the roads that have been cleared may likely be made impassable once again.

The seriousness of the situation is even further compounded by warming temperatures this weekend.

As Saturday rolls around, Buffalo is expected to not only break back into the plus side of the thermometer but should actually reach 20 C by Monday.

Strange as it may seem given the current situation on the ground, these temperatures mean a large risk for further damage from flooding as the snow melts.