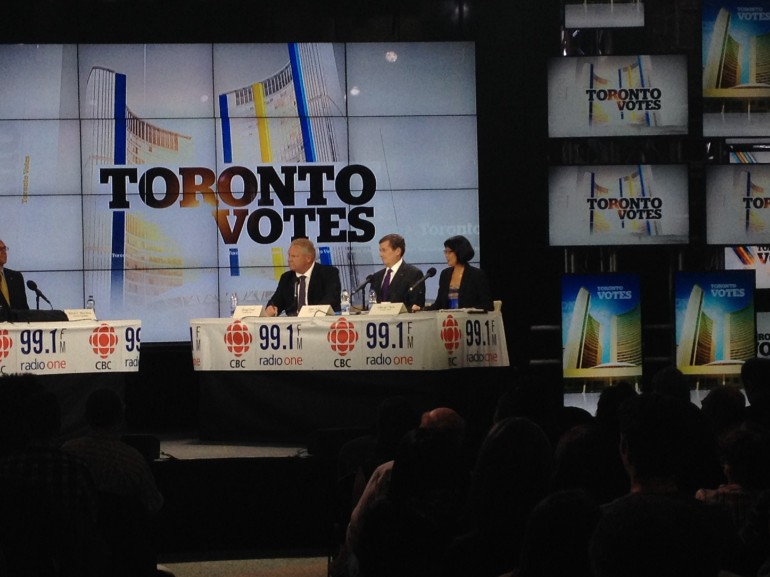 By Jordan Burton and Danielle Strohm

It’s election day across Ontario. By tonight we will know who will lead in Toronto and other municipalities across the province for the next four years.

Most eyes will be on the city of Toronto, who will have a new mayor after Rob Ford left the race due to hospitalization for a tumor in his abdomen.

Polls are open from 10 a.m. to 8 p.m. Torontonians looking for your poll and requirements, go to the elections website.

Today we look at the three leading mayoral candidates.

Tory during a news conference in September. (Adam Stroud/Humber News)

Tory was born in Toronto and went to Trinity College at University of Toronto where he earned a Bachelor of Arts. He then went to Osgoode Hall for his law degree and was called to the bar in 1980.

He worked in the office of premier Bill Davis in the early ’80s. Tory has worked on campaigns for Brian Mulroney and Kim Campbell. John Tory was the leader of the Progressive Conservative party of Ontario from 2004 to 2009. He ran in the 2003 Toronto mayoral election and lost to David Miller.

Tory has also been commissioner for he CFL, held positions with Rogers Communications and was named to the Order of Ontario in 2012.

Tory’s platform has placed a priority on an improved transit plan for Toronto, and that the city’s current transit system is hurting its economy with people spending more time in transit than at work. His priority is his SmartTrack plan, which includes a surface subway system with 22 stations.

He said he would like to expand partnerships with companies for improved youth employment. Tory said he would call his friends to hire more local youth.

Toronto councillor Doug Ford submits his paperwork to run for mayor of Toronto in place of his brother Rob.(Mark Blinch/Reuters)

Doug Ford was born and raised in Etobicoke and is the brother of current Mayor Rob Ford. He was elected as councilor for Ward 2 in 2010.

Ford is a member of the Rotary Club of Toronto West where he has served as treasurer and vice president.

Ford plans to expand the subway system, which he says will have less disruption to traffic and will be a long-term transit solution. His platform states subways have the capacity for future growth in the city. Ford has a three-phase plan for expansion, including 32 kilometers of new subway track which would cost $1.4 billion.

Ford said he would keep the city accountable and eliminate perks like limitless general budgets. He also said he would contracting garbage collection east of Yonge St.

Olivia Chow immigrated to Canada from Hong Kong at the age of 13 and lives in Toronto with her mom. She is the widow of late NDP leader Jack Layton.

She was first elected to office in the 1980s as a school trustee and became a city councillor in 1991. Chow was elected to Parliament as the MP for Trinity-Spadina in 2006 and became a leading voice in transit as the NDP’s transportation critic.

Chow said the only way to expand transit is investing in buses. She wants to invest $184 million in new buses and a new storage facility. Her plan is to create a subway relief line at a cost of $200 million, and LRTs along Sheppard Avenue East and Finch Avenue.

Chow said she wants to have more progressive taxes. She plans to change the land transfer tax based on income level. Increasing the land transfer tax by one per cent for homes above $2 million would create the $20 million. She would cover the borrowing costs for engineering studies, the first step in a subway relief plan.

Chow said the city needs to increase jobs for young people during this “unemployment crisis.” She said she will do this by requiring businesses with big city contracts to hire youth. Chow would like 5,000 new jobs and apprenticeships with the city over four years.