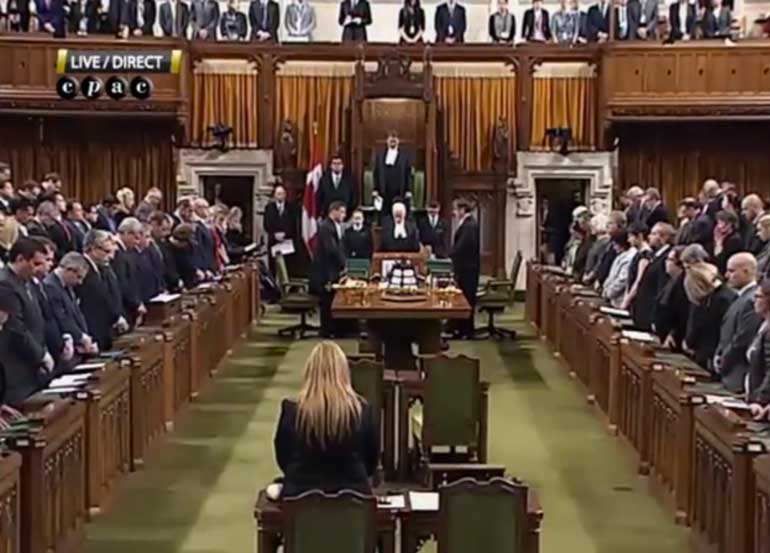 O Canada sounded through the halls of Parliament Thursday as t he rituals that kick off each day’s session in the House of Commons took on much greater significance. Wednesday, the nation watched in shock as their capital fell under attack.

The nation’s hero, Sergeant-at-Arms Kevin Vickers, entered the House of Commons at the head of the Speaker’s parade carrying the golden ceremonial mace he is often seen pictured with, struggling at times to maintain his composure as MPs honoured his actions with a thunderous wave of applause, many also banging the lids of their desks.

An equally powerful event came shortly after as MPs stood for a second moment of silence, for another hero, Corporal Nathan Cirillo, the Canadian soldier shot and killed yesterday performing a role eerily meant to honour the fallen who came before him.

Prime Minister Stephen Harper was the first to rise and remark on the previous day’s events, thanking both opposition leaders for their support throughout the night.

“In our system in our country, we are opponents,” said Harper. “But we are never enemies, we are all Canadians.”

He went on to thank the public for their continuing support as well as numerous foreign allies Harper said had reached out to express solidarity.

An air of seriousness could be seen to fall over the House as Harper began to discuss the tragedy that had unfolded the day before. He offered his condolences to the friends and family of both Cpl. Nathan Cirillo, 24, and Warrant Officer Patrice Vincent, 53, who was killed days ago in an unrelated act of domestic terror.

“Canadians will not be intimidated,” he said.

“We will be vigilant but we will not run scared, we will be prudent but we will not panic,” he told the House. “And as for the business of government, here we are in our seats, in our chamber, in the very heart of our democracy.”

Harper made sure to thank the men and women of the RCMP, Canadian Armed Forces, and Ottawa police saying their powers for surveillance, detention and arrest need to be strengthened moving forward.

“And most particularly of course Mr. Speaker I’d be very remiss if I did not conclude by acknowledging specifically the work of the security forces here at Parliament and the great work of our Sergeant-At-Arms,” he said.

Harper ended his remarks by crossing the green carpet to hug Vickers. He would then do the same to both NDP Leader Thomas Mulcair and Liberal Leader Justin Trudeau.

“Peace, tolerance and diversity,” he listed. “Mr. Speaker, they failed.”

Mulcair said the gunman’s desire to shake our nation has only succeeded in strengthening our resolve.

Like Harper, Mulcair expressed sympathy for the families of the fallen soldiers saying the country as a whole is behind them.

He would then turn, once again, to yesterday’s heroes.

“We don’t know the names of all the heroes from yesterday,” Mulcair said. ” But we all saw heroic gestures here in this place yesterday.”

“Yesterday we woke up in a country of love, of diversity, of peace — and that has not changed today,” he said.

Mulcair said if we are to ensure the gunman’s failure we must defend these values.

“It is fitting that we have come together in this place immediately to let the world know that Canada’s values are strong, our institutions are resilient and our people are united together,” he began.

Like Harper and Muclair, Trudeau said his thoughts and prayers go out to the families and victims, thanked first responders, and made a point to single out Vickers for his heroism.

Trudeau called Cirillo a hero and a father, saying we must honour his memory so as not to forget a child has suddenly and tragically been left fatherless.

“The individuals who committed these awful acts are not larger than life,” Trudeau told the House. “They are not giants, they are certainly not martyrs.”

He said to consider them as martyrs only perpetuates fear and gives credibility where none has been earned.

Trudeau would go on to say answers are vital in the immediate aftermath of such tragedies.

Much of the spotlight in the House today was focused on one man, and it wasn’t the gunman.

Kevin Vickers shot and killed a gunman Wednesday in Ottawa inside Parliament’s Centre Block. Numerous reports place the assailant outside caucus rooms where meetings were taking place at the time.

A report from the Calgary Sun quotes Vicker’s niece as saying it was the first time he’s ever had to shoot someone.

Mulcair informed the House Thursday someone from Vicker’s team told MPs to stay down as he stood against a barricaded door acting as a second layer of protection. He said all the while the gunman was on the other side of the door.

All party leaders rose today to express their sincerest gratitude to Vickers. Many MPs have suggested if it were not for him and his team, the attack could have been considerably more deadly.

In that spirit, Vickers led the ceremonial Speaker’s parade through the halls of Parliament and into the House, all the while carrying the golden mace that is meant to symbolize Royal authority.

Vickers first assumed his position on Sept. 1, 2006, after serving 29 years with the RCMP and risen to the rank of chief superintendent.

Canada’s Sergeant-At-Arms is in charge of all services and security for the Commons and is a position that is typically appointed by the Governor General on advice from cabinet.

Earlier in the day, many MPs made their way to the War Memorial before going to Centre Block to pay their respects to Cpl. Cirillo.

Plans for Harper and his wife to lay a wreath at the base of the cenotaph on their way to Parliament took an uncomfortable turn at one point when five to 10 officers with guns drawn moved in and arrested a man after having been deemed a potential threat by authorities. The Harpers ultimately were able to pay their respects without any further disturbances.