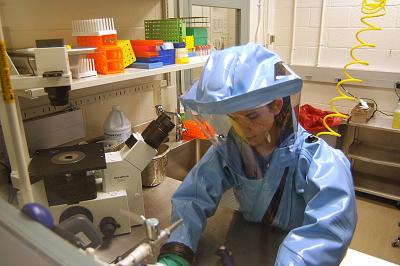 Researcher working with the Ebola virus
Courtesy of Wikimedia Commons

As one Belleville patient awaits Ebola test results at an Ottawa hospital, Canada is taking the necessary steps in making medical history.

The human clinical trials for the Canadian-made Ebola vaccination have begun at the Walter Reed Army Institute of Research in Maryland.

According to a Health Canada meeting on Monday, 20 vaccine samples will be tested on 40 healthy patients. It will be tested for appropriate dosage, assess safety, and diagnose side effects.

“This provides hope because if the Canadian vaccine is shown to be safe and effective, it will stop this devastating outbreak,” Ambrose said on Monday.

The vaccination has been tested on animals and is proven to prevent Ebola symptoms, and also can be taken after being infected to increase survival chances.

National Microbiology Laboratory Director General Steven Guercio said the team is very excited to start this phase of testing in efforts to exterminate the virus.

The first test phase of the vaccination will continue until December and, if effective, will begin testing on Ebola patients in West Africa.

Health Canada said there has been no confirmed sign of Ebola in Canada yet, and the risk is very low.

At least 4,000 have died of the Ebola virus around the world and is only continuing to spread, according to the World Health Organization.