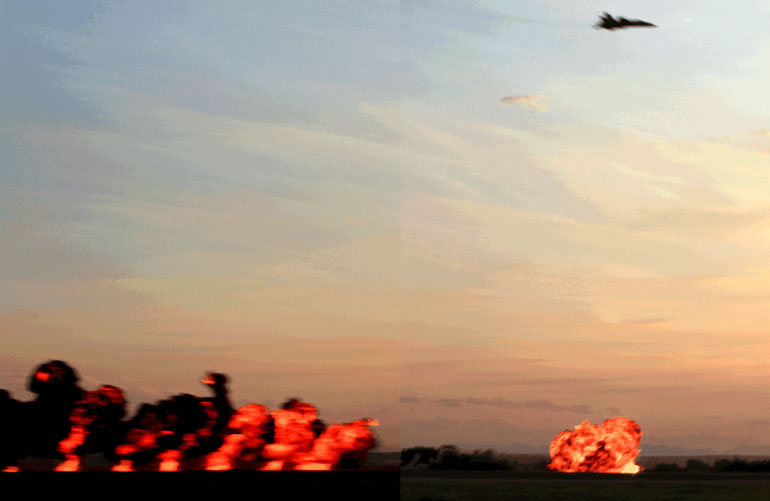 Harper announced the military deployment after Question Period today in the House of Commons, saying the international community is unanimous in its indignation of the militant group ISIS.

He said ISIS poses a direct threat to national security as they continue to advocate jihad on a regional and global basis, previously urging supporters to attack Canadians specifically saying Canadian homes are not safe.

“Today we are bringing forward a motion asking this House to confirm its confidence for a government decision to join our allies and partners … in launching airstrikes against ISIL,” Harper said, referring to ISIS by one of its many acronyms.

The Royal Canadian Air Force will send up to six McDonnell Douglas CF-18 Hornets, a CC-130 Hercules for air-to-air refueling and two CP-140 Aurora surveillance aircraft on a mission lasting up to six months.

Harper also said the government will extend the 30-day mission of the up to 69 soldiers already serving in advisory roles in Iraq.

He said the operation is meant to stop the spread of ISIS in the region as well as degrade their capacity to conduct terrorist acts.

Harper admitted that planes and bombs alone won’t be enough to destroy the threat posed by ISIS, but said their ability to strike would be significantly reduced.

The final decision on the deployment won’t be made until after debate and a vote in the House on Monday.

Simon Palamer, a researcher with the Center for International Governance Innovation’s Global Security and Politics program, told Humber News that Parliament is not required to vote on military deployments, but the Conservative government has regularly brought combat proposals for a non-binding vote.

Palamer said even though the vote in Parliament isn’t required, it is important that it occurs.

“We don’t know who our next Prime Minister is going to be,” said Palamer.

He said the upcoming 2015 federal election in Canada means the conflict could fall to someone else should Harper be defeated.

The decision to send air support to combat ISIS militants comes as no surprise after days of speculation following reports the United States had asked the Conservatives for support in the coalition.

U.S. forces have been carrying out an air campaign against ISIS with the help of international allies since August.

In his address, Harper did not rule out the expansion of Canada’s role outside of Iraq.

“We will strike ISIL where, and only where, Canada has the clear support of the government in that country,” he said. “At present, that is only true in Iraq.”

“If it were to become the case in Syria, then we would participate in airstrikes in that country also,” Harper said.

Canada already has 26 soldiers serving advisory roles in Iraq. The new commitment comes as those troops were set to return home Saturday.

Former Canadian prime minister Jean Chrétien has said previously Harper has put the military ‘all-in’ on the conflict in Iraq. Palamer said although any viable plan he’s seen involves boots on the ground, there’s zero appetite in the West for sending ground troops.

“You can’t win a war or fight a conflict or hold territory with air planes,” Eric Jardine, a Research Fellow in Global Security from the Center for International Governance Innovation, told Humber News this week.

He said that if things got worse, the nation that would be forced into a combat role would be the U.S. while other nations would likely be able to continue to provide mentoring, supervision and logistical support.

But New Democratic Party Leader Thomas Mulcair was quick to pounce after Harper exited the chamber, criticizing the operation with the comment “mission creep to mission leap.”

Mulcair told the House there’s no more sacred an act for a Prime Minister than sending men and women to fight and potentially die.

“The U.S. has been in this conflict for over ten years,” said Mulcair.

He compared the Conservative’s proposal to the ‘wrongheaded’ 2003 decision to invade Iraq and said all the horrors unfolding today stem from that decision.

Mulcair also questioned why military action is the only choice in Iraq when the option was never on the table for conflicts like those in the Congo and Darfur.

Liberal leader Justin Trudeau said his party supported the limited 30-day non-combat mandate in good faith but would be unable to support the Conservatives on this motion.

Trudeau also said there was zero effort made to brief MPs on what Canada’s response to the ISIS threat would be and the Canadian public was left in the dark.

He said that once in the conflict, the government has given Canadians little reason to believe our role would stay restricted.

“We know the Iraq fiasco haunts the choices we have to make today,” he said.

Opposition leaders have attacked the level of secrecy around our mission in Iraq and claim our country is being sent to war from behind a curtain.

Compared to the United Kingdom where the Leader of the Opposition was able to stand in the British House and tell MPs the government’s plan was just , proportional, and carried a reasonable chance of success, parliamentarians in Canada were not offered the same level of openness.

Reactionary tweets started to hit the web immediately following the announcement. Many Twitter users approved of Harper’s decision to join the fight

This is not 2003. This is 2014 and Canada has been threatened, specifically. #ISIS has bragged they’re coming. What isn’t understood? — Alberta Girl (@AlbertaGrl) October 3, 2014

You may not like #Harper, but world powers, including Canada, cannot remain silent when little children are beheaded. #ISIS #Iraq #Syria

Others weren’t as on board with another military excursion in Iraq.

Watching the news on ISIS and Canada’s plans is making me very angry and uncomfortable. — molls. (@mollywalkerr) October 3, 2014

“ISIS has targeted Canada and Canadians.” PLEASE. Please. Give me a break.

Serious question: In what sense is ISIS a direct threat to Canada? — James McLeod (@TelegramJames) October 3, 2014

Others went for humour and sarcasm.

Even CANADA will join air strikes against ISIS? Sheesh.

Trudeau struck a cord with many when, in response to the Conservative motion, he labeled the CF-18s as ‘aging’.

In 2010, the Canadian government announced the F-35 Lightning II fighter would replace the CF-18s. The first deliveries were to begin in 2016.

Rising costs forced the government to abandon the plan in 2012.

The F-35 is still being considered as a replacement for the CF-18s which have been granted extended life through 2025.

Palamer said the age of the fighters shouldn’t be an issue in Iraq.