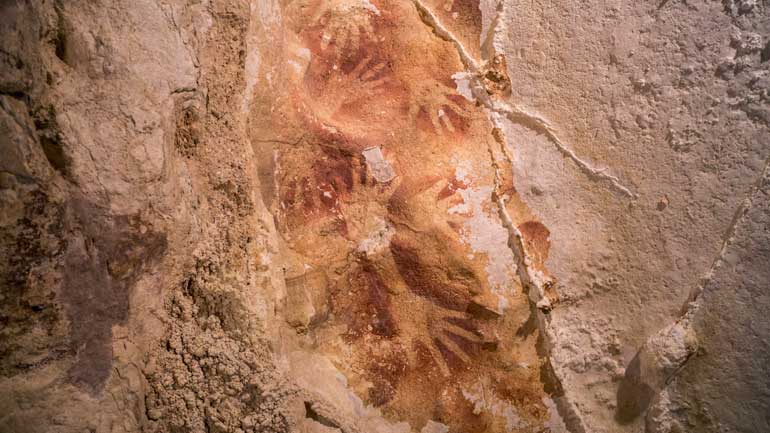 Archaeologists have known about the painted hand stencils and animals on the limestone walls of caves in Indonesia for almost half a century. A new study has identified their age.

The findings were unexpected.

The paintings are possibly the oldest known to man and have challenged the understandings of the origins of cave art.

Researchers based in Indonesia and Australia were able to test uranium decay of the stone in seven caves in Sulawesi,  which revealed the paintings to be about 40,000 years old, almost the same age as the oldest cave art previously known in Spain and France.

The oldest known cave painting up until now has been the 40,800 year old smudged red disk in El Castillo, Northern Spain.

The ochre stencils of human hands and drawings of an animal called a “pig-deer” may change the long-held belief that Europe is the origin of cave art.

“It is often assumed that Europe was the centre of the earliest explosion in human creativity, especially cave art, about 40,000 years ago,” said co-leader of the study Maxime Aubert in a press release issued by Griffith University in Queensland, Australia.

“But our rock art dates from Sulawesi show that at around the same time on the other side of the world people were making pictures of animals as remarkable as those in the Ice Age caves of France and Spain,” he said in the release.

The oldest of the 14 paintings studied by the archaeological team is a hand-stencil, made by blowing paint over a hand pressed against the limestone surface of the cave. It is at least 40,000 years old.

One painting of a fruit-eating pig, also known as babirusas or “pig-deer”, is estimated to be 35,400 years old.

SeungJung Kim, assistant professor of art history at the University of Toronto and president of the Toronto chapter of the Archaeological Institute of America, said she was surprised and excited when she read the news.

From a teaching perspective, the discovery helps remind academics that, although vast, knowledge is still limited.

“It’s important to give a sense to students that what we seem to know so far may only be a partial truth,” she said. “There can be much deeper knowledge that we may not have access to yet that can change the picture entirely.”

Kim described the discovery that cave art was happening on the other side of the world at the same time it was in Europe as philosophically interesting.

“There was this amazing amount of interconnectedness in the ancient world,” said Kim.

Thinking about the human ability to be interconnected globally through technology is perhaps something that only enforces an interconnectedness that already exists.

“It’s humbling to think about how this widespread human activity (existed) over vast geographical areas is not so different from notions of the globalization of the world,” said Kim.