Climate Change is Spooky: a fun event with a serious message 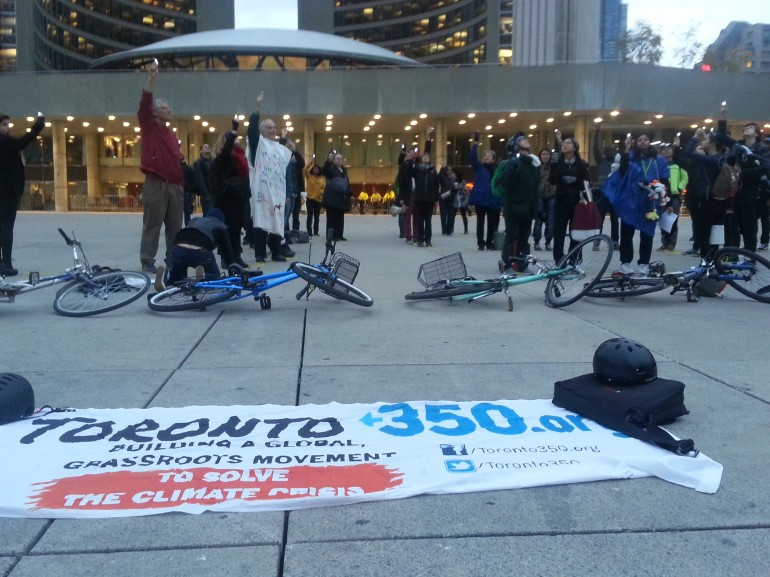 Climate Change is Spooky. That’s the message from Toronto 350, an environmental group trying get the word out about an ignored terror they say is facing Toronto: rising carbon emissions.

The event Thursday night  in Nathan Phillips Square spelled out the number 350.

As the sun fell members held bike lights to light up the number that media director Amanda Lewis said is so significant.

A  world-wide grassroots organization, 350.org has members in 188 countries.   The number, “350 refers to the maximum amount of carbon that can be contained in the atmosphere before the climate goes completely out of control,” she said. “We are currently at 401 parts per million.”

Lewis said the event was to raise awareness about that number and to tell the newly elected council and mayor that Torontonians hope to see the city take action.

“Cities have a major role to play in addressing climate change,” she said. “There are a lot of things we can do on a local level from increasing public transit to taking action on local pipelines.”

About 100 members met at sunset Thursday night in front of city hall to make a peaceful statement about the importance of environmental consciousness.

Amanda Hunter has only been a member for a couple of months.

She joined the group when it organized a trip to New York City for the People’s Climate March in September.

Hunter said people are aware that climate change is an issue but that activists need to approach the issues differently.

“The facts are in, the science is in that climate change is a real issue,” she said. “A lot of the science isn’t being communicated in an effective and interesting way that invites others to participate. Environmental messaging has to be more interesting visually and in terms of what is actually being discussed.”

Kevin Metcalfe, a member for just over a year, agrees that the approach needs to change.

“I don’t know that anything needs to change their mindset, I think that we need to change the way were approaching those people,” he said.

Metcalfe said non-confrontational, peaceful and creative activities like the Climate Change is Spooky demonstration get the word out without forcing it down peoples’ throats.

Hunter said events like this one, which is organized by the Toronto chapter, are meant to recruit interested people and bring them into the discussion as participants.

A lot of people border on action but never take that crucial step, said Metcalfe.

Paul Murphy attends as many events as possible, not just Toronto 350’s but of any environmental group. He isn’t an official member of any.

He said that his connection to climate change and the discussion is more personal, within his own circles of friends and family.

He says he often walks down Yonge Street and that people either react with anger or by ignoring him.

“That’s the same reaction, isn’t it, pretend the issue isn’t there,” said Murphy. “They pretend I’m not there when I walk around extravagantly dressed.”