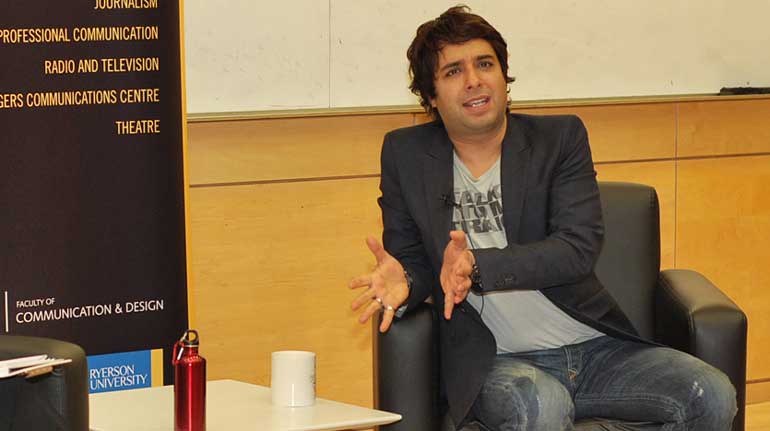 Jian Ghomeshi’s personal brand is on the decline as more women speak out against him (photo courtesy Damien D./Wikimedia Commons)

Jian Ghomeshi’s consultation and communications firm Navigator confirmed it ended its relationship with the broadcaster.

From Navigator, re: Ghomeshi pic.twitter.com/q8SIebcXpx

A source with inside knowledge told the Toronto Star that the reason for ending the relationship with Ghomeshi was because of alleged lies he told to the PR firm.

Daniel Schneider teaches public relations at Humber’s School of Media Studies. He told Humber News that honesty is the first rule of public relations, even in situations as serious and damaging as what Jian Ghomeshi is currently facing.

Navigator is known for handling high profile cases like Ghomeshi’s. The firm is not a typical public relations firm who write press releases and promote brands. They are known to specialize in crisis management.

“(Navigator is) much more than PR, as people understand PR,” said Susan Krashinsky, Marketing reporter at the Globe and Mail, who wrote an article on the firm on Wednesday.

Krashinsky told Humber News it was not a surprise that Ghomeshi had hired the firm, but that his hiring of the firm is not signifying of anything more than him trying to protect his reputation.

“This is an incredibly serious and damaging situation for him, but any attempt to infer whether the hiring of Navigator means for his guilt or innocence is misguided,” she said.

There is no word if Ghomeshi has found new representation or how the loss of Navigator will impact how he proceeds in the future.

Few facts are known about Ghomeshi’s case, but in a series of articles in the Toronto Star by investigative reporter Kevin Donovan and freelance writer Jesse Brown eight women have come forward claiming various acts of verbal, physical and sexual assault by Ghomeshi.

It appears the allegations against Ghomeshi are directly responsible for the CBC firing him from his position as the host of the popular show Q, a show he help create and has hosted since 2007

None of the allegations written about in the Star have been proven in a court of law and at this time no formal police investigation has taken place.

Ghomeshi initially got ahead of the story by posting a long post on his official Facebook page claiming he was the victim of a “jilted ex-girlfriend” and a freelance writer with a grudge.

Schneider said to Humber News that this type of strategy is very common. The goal is to prevent infomation from an alternate and possibly unreliable source.

He also told Humber News how important social media has become in public relations in the 21st century. Social media give the client the ability to address their primary audience directly without the intervention of third parties.

Lydia Boyko teaches public relations at Humber College Lakeshore Campus. She talked to Humber News via e-mail to give some insight into the effectiveness of Ghomeshi’s strategy so far.

“My own view of the issue, from a PR perspective, is that open, honest and full disclosure of one’s position is certainly an aspect of the code of good PR conduct. In other words, tell your story before others do this for you,” she said.

Boyko said public relations and damage control are never clear cut and there are many possible approaches that may be seen from a high profile case like this one.

“If the nature of the disclosure is unpalatable or offensive or deemed unethical in some way to (or) by certain audiences is silence more appropriate?” she asked. “Does the ‘target’ risk breaking relationships with his (or) her key stakeholders? And, if the ‘target’ launches a lawsuit, is selective disclosure a sound decision?”

It is impossible to know what will happen next as since the allegations have come to light on Sunday, Ghomeshi has largely remained silent.

He has only released one statement since his initial post. On Thursday he said on his official Facebook page he will “address these allegations directly.”

The response to Ghomeshi’s first Facebook post was largely in his favour. Ghomoshi still has many online followers and supporters but the tide appears to be turning and he is losing Facebook fans at an alarming rate.

Here is a brief look at some of the online chatter surrounding the allegations.