Royals and Giants face off in first game of World Series 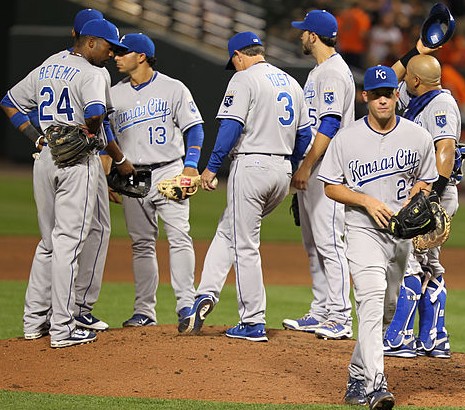 The Kansas City Royals will take on the San Francisco Giants tonight in the first game of the World Series.

This is the first finals match-up between the two and the first time in 29 years the Royals have reached post-season let alone the World Series. The Giants, on the other hand, are going for their third title in last five years, having beat the Texas Rangers in 2010 and the Detroit Tigers in 2012.

Kansas City Royals have been unstoppable since the start of the postseason. (Photo by Keith Allison/Flickr)

Baseball expert and Sportsnet writer Ben Nicholson-Smith told Humber News it’s hard to pick out a definite winner for tonight’s game and in the series.

“It’s going to be close one way or another and I think (Kansas City’s James) Shields is probably going to benefit from the rest that he is getting; he looked a little worn down towards the end of the playoffs and end of the regular season.”

Nicholson-Smith also mentioned Giants pitcher Madison “MadBum” Bumgarner has been unstoppable for the last month and his match-up with Shields will be interesting to watch.

“I give the edge to Bumgarner but then you got the game in Kansas City and maybe the crowd gives the Royals a little bit of a boost,” said Nicholson-Smith, but added home field advantage does not have as big of an affect as it does in football or basketball.

The Royals finished the season with fewer regular season wins than six teams in the MLB. Despite all odds, they are the only team not to lose a game in the postseason.