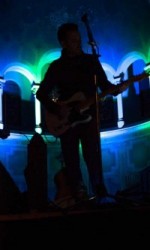 Musical performers from around the globe will be scattered throughout Toronto music venues starting tonight for the 13th annual Small World Music Festival kicks off Thursday night.

Alan Davis started the Small World Music Society in 1997. Davis, a musician himself and the society’s executive director, was inspired by prominent musical figures that were using their influence to expose different cultures of music in the mid-80s and 90s. Peter Gabriel was particularly inspirational to him, he said.

The society is a charitable organization whose mission is to “assemble a program that combines international and local artists to celebrate cultural diversity through music,” said Davis.

Unlike the past three years, a free, day-long event at Yonge-Dundas Square will not be part of the ten-day festival.

But for the first time, Small World Music Society has its own venue, which opened its doors in February of this year. Steering away from the “cold, concrete” atmosphere of Yonge and Dundas square has shrunk numbers, but the Small World Music Centre provides the means to have more intimate performances and events, Davis said.

The free launch event for the festival is tonight at the centre, on Shaw St. near Trinity-Bellwoods Park, and will celebrate the new venue and feature Toronto-based Os Tropies, a Brazilian tropicalia band.

“Our music is a bit different from what you’d expect when you think of Brazilian music,” said Amy Medvick, vocalist and flutist of Os Tropies.

“It’s based on music that a group of Brazilian artists created in the 60s to start a conversation with North American rock and roll,” she said.

Medvick said she believes the tropicalia genre is one that not many musicians in Toronto experiment with. She mentioned only one other band she knows of based in Washington, D.C.

“We talk a lot about how Toronto is a multicultural city and we celebrate that aspect of it, which is great. But I do still think there’s a certain degree to which this music, and various kinds of [international] music are probably underrepresented,” said Medvick.

Five of the six members of Os Tropies are graduates from Humber College’s jazz performance program. None of them are from Brazil.

“We play this type of music representing the North American side of the conversation,” said Medvick.

“It raises questions about what it means to represent music from another place outside of its context,” she said.

Drew Gonzalvez is a Trinidadian-Canadian songwriter and is performing with his band, Kobo Town at Revival Bar on Sept. 27, accompanying the “queen of calypso,” Calypso Rose.

Gonzalvez has been going to the festival for years and said he was introduced to a lot of great music in the city through it. His enthusiasm was evident when speaking about his upcoming performance.

Calypso Rose’s “songs are uplifting, full of rhythm, and full of commentary,” he said, adding that the audience will walk away with a dance in their step and something to think about as well.