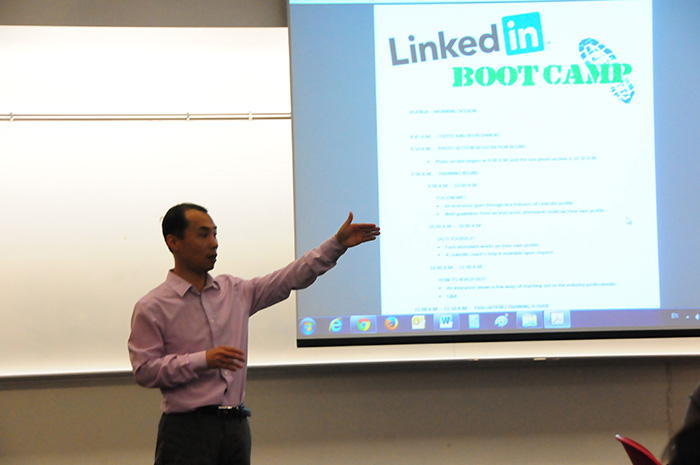 Getting an edge when job hunting is more crucial now than ever, but Humber’s LinkedIn Boot Camp was created to give students just that.

Since LinkedIn’s beginnings in co-founder Reid Hoffman’s living room in 2002, the company has grown into a massive presence in the social media scene and has become a must-have tool for those in the business world.

Humber students lined up to have their headshots taken with hopes of improving their online image.

Humber’s Career Centre, which helps students transition from college to the working world, held another event aimed at just that: its LinkedIn Boot Camp.

The two-hour seminar at the North Campus B Building taught students about the tools LinkedIn provides and helped them polish their online business profiles.

For the second year in a row, Byung Oh, a career resource developer at Humber’s Career Centre, led the seminars.

“Typically when people would search for a job they would apply and wait,” said Oh. “But through LinkedIn, you can reach out and show companies your profile before job postings even come up.

“LinkedIn gives you every tool to reach out and make yourself look good,” he said.

Three distinct features have helped LinkedIn separate itself from other social media companies.

The first is its ability to create a professional online brand with complete control. This includes an online CV, pictures, links to portfolio work and listing current and former positions held.

Secondly is its efficiency as a research tool. Job seekers have the opportunity to look for things such as what qualifications are coveted, what public image the company has set and what experiences are being looked for.

Finally, LinkedIn is extremely efficient at helping professionals of all ages connect and grow their network.

Gillard (Right) with another Humber student discussing their profiles before the seminar.

“I saw how many how-to’s there were in Chapters about creating a professional LinkedIn profile,” said Christin Gillard, a third-year Media Studies student at Guelph-Humber who attended the seminar. “So I realized I could use some assistance rather than treating it like another Facebook profile.”

“I liked my profile, I thought it was strong, but there were so many details covered today that are so relevant,” she said.

During the presentation, Oh listed the three most important aspects to any LinkedIn profile (which, coincidentally, takes up the most screen real estate): position, name and picture.

Taking a professional headshot was included in the seminar. Students had opportunity to have a photo taken by a quality photographer at no cost. These photos will be emailed to each student within the next week.

Two LinkedIn Boot Camp seminars were held at Humber North today, and another two are set for Thursday at Humber’s Lakeshore campus.