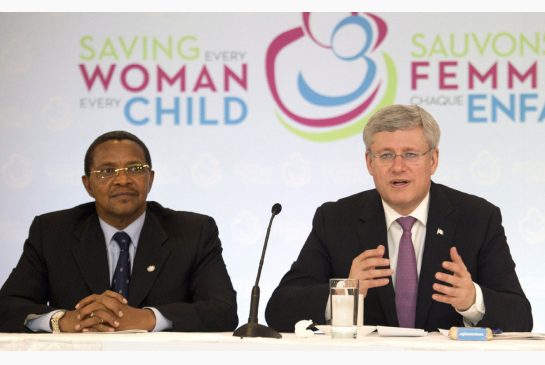 In his first UN General Assembly speech since 2010, Stephen Harper turned towards the issue he says is closest to his heart: the Maternal, Newborn and Child Health Initiative.

“We are preventing, and can prevent more deaths, deaths of thousands of children every day from easily preventable causes,” said Harper.

“We can stop thousands of mothers dying in childbirth who, with relatively little intervention, would survive,” he said.

During the speech on Thursday night, Harper praised the progress that has been made since 2010. He said the meeting that year in Muskoka raised $7.5 billion towards the UN Every Woman, Every Child Initiative.

This initiative aims to save 16 million lives by 2016. It is an extension of the UN Development Goals that aim to reduce the under five-mortality rate by two-thirds by 2015.

Although UNICEF says this benchmark is unachievable, this rate has already declined by half from 1990. In that year the under five-mortality rate was 90 per 1,000 children. Now that number is 46.

Although the 2016 goal is unrealistic all preventable death in infants and mothers could be eliminated within a generation, said Dr. Helen Scott, the Director of the Canadian Network for Maternal, Newborn and Child Health.

“We’re on track. The momentum has been phenomenal and Canada’s leadership has been tremendous,” she said.

Dr. Zulifiqar Bhutta is the Robert Harding chair in global child health and policy and the co-director of the Centre for Global Child Health at SickKids Hospital. He is less optimistic.

“To get it done, two things are needed now: the political focus and renewed financial commitment,” said Harper.
Maternal, newborn and child health must remain a top political priority, he said.

Scott said that 800 women are still dying every day from preventable causes.

“This is fixable, we have the methods. We know what to do it’s just a matter of getting the medicine and healthcare to these women and children,” she said.

Scott said the next step is to target the most vulnerable women and children, those that are hardest to reach in urban slums and fragile states.

Bhutta said countries have focused on this issue unequally and that many countries, particularly those in Africa and parts of South Asia, are far away from achieving the millennium goal targets.

“Where countries have been able to give it attention and give leadership, progress has been made,” said Bhutta.

Harper said that despite competing priorities nations should continue to financially contribute to maternal, newborn and child health.

He promised to support the World Bank’s Global Financing Facility for Every Woman, Every Child.

The facility was revealed by World Bank President Jim Yong Kim Thursday morning. It will make it easier for developing countries to access financing to improve their health systems.

Harper also announced a $200 million contribution to the fund as part of a $3.5 billion promise made in May to be distributed over five years.

Scott said that these contributions are significant. Canada is spearheading the creation of a civil registration and vital statistics database.

“One of those underpinning structures that all really good health systems have is data to guide them,” said Scott. “One of the key things to make this better is to know who is dying, why they’re dying and where they live.”

She said the World Bank is very innovative in its financing mechanisms. The new facility will work with developing countries to create their own health systems.

Scott said it’s unacceptable that a child or mother dies in 2014 because they can’t access basic medication and that all Canadians should get behind the effort.

“It’s a Canadian issue, not a partisan one,” she said.

Global under five mortality by country