A Dark Room a breakthrough success on iTunes App Store 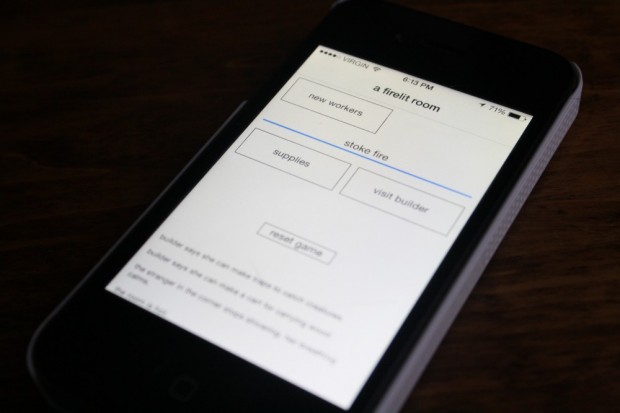 Awake, head throbbing, vision blurry. The room is cold. The fire is dead.

From A Dark Room‘s titular opening scene in a darkened hut in the wilderness, the self-described minimalist text adventure’s story gradually evolves into a more expansive narrative that has helped land it on the #1 spot for paid apps at the iTunes App Store. It remained there for three weeks, and has since garnered an average of 10,000 downloads a day and over 7,000 user reviews.

The game is composed entirely of text, with no graphical elements to speak of. The developers, Canadian Michael Townsend and American Amir Rajan, have never actually met each other, and neither of them expected the game to reach the level of success it now has.

“I wasn’t really sure what to expect, but certainly not a number one iOS app,” said Townsend. “I felt that A Dark Room had viral potential, but the internet is fickle and unpredictable, so I had no idea whether it would actually take off or not. I am constantly surprised by its success. Every bump in traffic has come as a shock.”

“The more I reflect on A Dark Room’s success, the less I understand it, really,” said Rajan. “Nothing adds up, and being a software developer (ie: an analytical nerd), I obsess sometimes about understanding this mystery.”

But before it became a hit mobile game, A Dark Room began as an idea by Townsend, who would often toy around with game development in his spare time. He later found inspiration from Candy Box, a small, similar-styled text game developed by a French computer sciences student.

“When I first played Candy Box, I was between projects and was immediately struck by how much it made with very little,” he said. “I was certain that I could finish a game of that scope before losing patience, and I felt that the narrative possibilities of the genre hadn’t been fully explored.”

Townsend then worked on developing the game on his own. He created his own game studio named Doublespeak Games and uploaded the finished game to his website for free. Eventually, Rajan found the game and offered a proposal to Townsend.

“I was browsing Twitter and saw a tweet about Michael’s creation,” said Rajan. “After playing the game for a bit, I fell in love with its presentation and how effortlessly it kept me engaged. I was on a learning sabbatical at the time and decided then and there that porting A Dark Room to iOS would be a great way to learn iOS. I emailed Michael, giving him a little bit of my background and my idea of the port, and he gave me permission to do so.”

Their partnership resulted in the biggest surprise hit of the year, which has held a long-term spot in the App Store’s top list. As of this writing, A Dark Room is listed #6 in top paid apps on iTunes.

“A Dark Room’s success was hard fought,” said Rajan. “I spent many months promoting the game on my own via Reddit, Twitter and assorted gaming forums. Its viral nature is completely irrational, and took a long time to take form. It wasn’t an overnight smash hit.”

“I hope that, if nothing else, A Dark Room has shown that interesting games can come from anywhere, and from anyone,” said Townsend. “It doesn’t take huge budgets, large teams, or even a whole lot of time to make a game. All you really need is an idea and a little bit of persistence.”

Townsend then made an appeal to aspiring developers:

“The code for A Dark Room is on GitHub, and I urge anyone who’s interested to dive in. Use it as a learning tool, or even the base for your own creations. Go build things!”