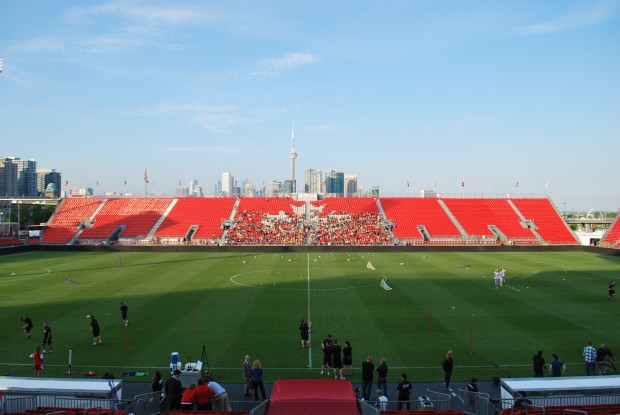 BMO Field in Toronto as it is currently configured. Photo courtesy of The West End on Flickr.

BMO Field will be receiving city funds for upgrades that include a new roof, expanded seating, and other modifications, after the council approved the proposal.

The project is expected to be completed in time for the 2015 Pan Am Games but must receive funds from the other levels of government to move forward.

“This renovation at BMO Field is designed to create opportunity more than anything,” Dave Haggith, the senior director of communications for Maple Leaf Sports and Entertainment, told Humber News.

The proposal for a $10 million loan was passed by Toronto’s city council following a 39-3 vote. Mayor Rob Ford and his brother, city councillor Doug Ford, made up two of the three votes in opposition of the plan.

“Through this process, we advised the city how BMO Field at one stage was one of the top facilities in Major League Soccer, but is now probably considered one of the bottom third,” Haggith said.

“There’s a lot of opportunity that exists for bringing large events, sports and entertainment events, to Toronto that will create an economic impact for all three levels [of government].”

The detailed plans of the expansion project

The project includes a partial roof that will cover the seats but not the field. A high-end hybrid turf system will use natural grass in combination with artificial fibres to strengthen the pitch.

“A top priority is improving the soccer environment there,” Haggith said.

Currently, BMO Field holds 21,500 people for soccer games. The expansion plans will increase this number to 30,000 permanent seats for soccer. The facility will be able to hold 25,000 when hosting the Argonauts, with the ability to expand to 35,000 to 40,000 for special events with temporary seating.

The proposal also hopes to find a permanent home for Toronto’s CFL team. The Argos are set to leave the Rogers Centre following the 2017 season. This will accommodate the Blue Jays’ plans to install natural grass at the stadium formerly known as SkyDome.

“With this renovation project, it’s not just about Toronto FC or the Argos. It’s about all of the opportunity that it can bring to the city of Toronto. With that, everybody wins,” Haggith said.

As is, BMO Field isn’t capable of handling major events such as the Grey Cup and the Winter Classic. Expanding the amount of seats will be an instrumental part of attracting these events to the city-owned stadium.

The economic costs of the project

The plans put forward by MLSE are slated to cost $120 million. The company that owns the Maple Leafs and Raptors is seeking $10 million each from the city, the provincial, and federal levels of government for a total of $30 million loaned by the government.

Deputy mayor Norm Kelly spoke in favour of the project. He said the city was co-investing in their own project by upgrading a city-owned facility at a discounted rate. “Why on heaven’s earth would you want to turn that down?” Kelly told council as featured in the Toronto Sun.

The Toronto Star reports city manager Joe Pennachetti told council that the proposal is “a very good deal” for the city because the money will be paid back with interest within 20 years.

“We’re enhancing our own asset and it’s costing us nothing at the end of the day,” Pennachetti told the Star. “I believe this is a significant enhancement to a city-owned asset that basically is something that rarely comes along.”

MLSE will chip in the remaining $90 million for the expansion project. The deal also includes a ten-year lease extension that would be set to expire at the end of 2037.

Haggith said the biggest hurdle moving forward is timing. “The different levels of government want this facility to be ready in time to be a showcase facility for the Pan Am Games.”

MLSE hopes to get approval from the provincial and federal levels of government within the next month or two, Haggith said.

They’d like to start construction in time for September to have the project completed in 2015.