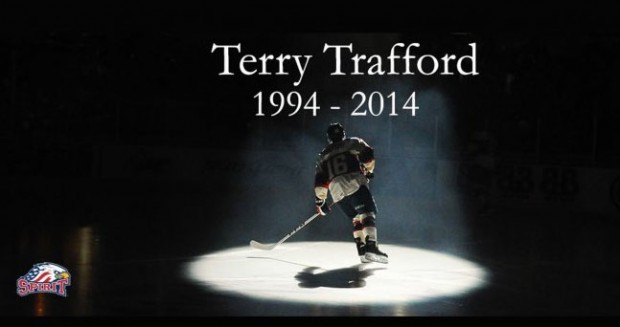 When you visit the OHL’s Saginaw Spirit team website, you’ll find a tribute to Terry Trafford, the 20-year-old who was found dead in the back of his truck this week.

In a Toronto Sun article, Trafford’s girlfriend said he was stressed about getting drafted into the NHL, an all-or-nothing scenario in his mind in the toughest junior hockey league in the world.

Since the NHL draft was implemented in 1969, nearly ten thousand players have been drafted. Of those selected, over 2,100 were selected out of the OHL – more than any other league worldwide.

“I can relate to the feelings he was [likely] feeling,” said one-time prospect Stefan Legein, who dealt with similar pressures of making it to the NHL. “We are in a profession where being perfect in every aspect is a must, and when we aren’t, it takes a toll on our careers which in turn puts athletes under tremendous mental stress.”

In an exclusive interview with Humber News, Legein opened up about his reaction to Trafford’s death, and the mounds of pressure inflicted on himself and on youth hockey players.

“For me it was never living up to my expectations. I had a lot of success come quickly and the pressure to be the person and player everyone wanted me to be was hard.”

Legein said educating athletes at a young age is key to building a proper mindset down the road to prevent scenario’s like Trafford’s from happening again.

“I think that’s what a lot of kids deal with… it’s a major problem,” he said, adding, “they put their whole lives into this game and it needs to be taught that your whole life isn’t something that ends in your thirties.”

Sports Psychology Consultant at the University of Western Ontario Dr. Natascha Wesch said it’s essential for athletes to speak up when it comes to dealing with pressure.

“There should be somebody to talk to,” she said. “It has to be somebody who is removed from making decisions about the athlete’s play.”

Trafford’s girlfriend told the Sun he confided in her, refusing to seek help elsewhere. Dr. Wesch said although it’s a step in the right direction, everyone involved is usually invested in the performance in that athlete.

That’s not the case when seeking help from a third party.

“The athletes knows it’s a safe place to talk… they feel comfortable, they feel that they’re in a safe place,” Dr. Wesch said. “They can talk, and the person they’re talking to isn’t going to tell them how to play the game, they’re just helping them cope with the realities of their life situation in that moment.”

Police have yet to confirm the cause of Trafford’s death, and the investigation is ongoing.