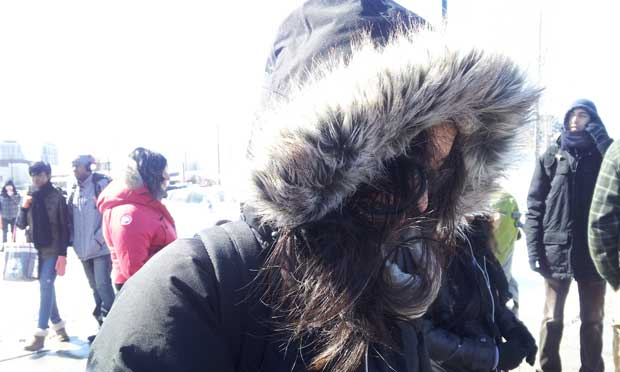 After Tuesday’s warm weather raised hopes that spring was just around the corner, Thursday’s low of minus 17 C may feel like a shock.

“This has been the coldest December, January, February since the winter of 1993-1994,” Coulson told Humber News.

And the trend has continued in to March. The temperature in Toronto at this time of year should be between minus 4 C and 4 C, says Coulson.

“I feel like we’re living in Alaska or something,” Chase said

Jared Mason dreams of moving to L.A.  “Honestly, I hate the cold,” said the media foundations student. In the meantime, though, he says he’s been “throwing on those winter coats, putting on layers and sucking it up.”

As if the cold weather weren’t enough, Toronto was covered in 15 cm of snow Wednesday, complicating Thursday morning’s commute.

“There’s a lot of black ice on the road,” said Mason. He commutes to Humber from Maple, Ont., east of Highway 400. “It was just a terrible drive this morning.

“It took a long time because it was so slippery and I live in the middle of nowhere,” said Chase. She commutes from Caledon, Ontario, an hour and a half drive on a good day.

Dante Lupo lives in residence at Humber, but even he was affected by the heavy snowfall. “Walking across the parking lot I almost fell, like, four times,” said the media foundations student.

“We have a total of 200 salt trucks, 300 sidewalk tractors, and 600 road plows to deal with yesterday’s storm,” said Trevor Tenn, manager of road operations for the city’s transportation services.

“Two years ago we hardly had any [snow],” Tenn said, “It’s a little more than usual [this year], but we’re ready to deal with it.” He added that the city is making sure to stock plenty of road salt in their domes.