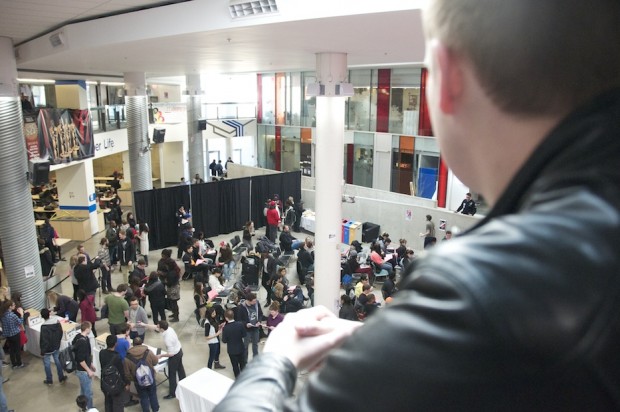 Shawn Manahan voicing his opinion at the AGM

It was 89 to 90 when the vote was counted through a show of hands at the Humber Students’ Federation Annual General meeting.

For Shawn Manahan, elected two weeks ago as president of the HSF, it was a slim margin to a painful defeat.

Ninety students at the meeting voted against a motion to uphold the original election result; 89 students voted to endorse Manahan’s controversial win.

There will be a by-election for HSF President only but HSF has not yet decided when.  The deadline for filling the position is September 30, 2014.

The vote today means Manahan will not be taking over the office on May 1, and will not be there to guide the four other HSF executives who were elected March 14 and will begin their term May 1st.

Manahan, who has run for HSF president twice in a row – will have to change his plans.

“There’s a personal loss of course,” Manahan told Humber News. “I don’t have a summer job. I’m going to have to campaign again – for what I’ve already won.”

“So I’m going to go in the by-election – and I’ll make damn sure I get the position again – with six to eight months of backed up work, with no training.” If the position goes unfilled until September, “I’ll be going head first into the busiest time of the year. It’s a small loss for me but a huge loss for students overall,” said Manahan.

Manahan predicted the elections could cost up to $100,000, money he said could be better spent helping students.

The target of his anger was clear.

Tim Brilhante, who was disqualified and taken off the ballot less than 24 hours before the election week was over – will now get another chance to run for HSF President. He says it’s not about him, but about the process.

“The students got what they came for, “ Brilhante said. “All we wanted was an appeal. We gave those 2500 students that voted for me, who were voiceless, their voices back. To me, that is more powerful than anything.”

Initially scheduled on the agenda for HSF’s AGM was a motion to approve the newly elected HSF executives. However, Brilhante, the current president, made an early claim to amend that motion so that the vote would only involve the presidential election.

“Why would we force four VP’s to run a new election for themselves, when really, what I believe, the question is just for the role of president,” said Brilhante.

The amendment passed, and members on the Board of Directors, as well as the general full-time students who attended the debated whether Brilhante deserves another election, the Elections and Appeals Policy, as well as if that was followed or not.

Students lined up at the microphone waiting to have their say, for and against the motion. The student centre was packed and the meeting was uncharacteristically lively.

Kay Tracey, current VP of Student Affairs at the North Campus, urged the students to look carefully at the issues.

Candice Pellew, current VP of Student Affairs at the Lakeshore Campus, brought up the rules, and made the point that Brilhante knew the rules beforehand.

“It says over 22 times that it’s up to the sole discretion of the CRO,” said Pellew. “Since you approved the policy, how do you feel that it is just that you can go back and change the policy?”

In defense, Brilhante fired back with “Nobody’s saying we want to go back and change the policy. All we’re saying is that it wasn’t followed and so it’s up to us as students who have the power to hold us accountable,” said Brilhante.

Colin Edwards Crewe, current VP of Student Life at Lakeshore, was another voice that wished to be heard. Crewe, who is on the Board of Directors and has been the VP of Student Life at the Lakeshore campus for two years straight, said even through he was throwing up for six hours the night before, he said he strongly wanted to show up at the meeting. In the weeks leading up to the AGM, he said he saw too many things happen where the wool was being pulled over the students’ eyes.

He also disputed the fact any of the votes during the HSF elections race were not counted.

Cristina Marin, who is on the Board of Directors, also made a point to bring up Brilhante’s lack of office hours in the past week.

“The president gets paid $40,000  a year to work 35-40 hours a week. The current president was only present in the office for 21 hours last week. He still gets paid for a full-time (salary). I believe as a student you have to be held accountable. You are wasting student money,” said Marin, before the chairperson Rosa Figeuora cut her off.

One student saw it differently.

“Where does it say we’re voting for Tim Brilhante? This is about 50 per cent of the student vote being misrepresented. I believe I have the right to choose a candidate of my own as opposed to have one selected for me.”

In the end, the hands were counted: the motion to uphold Manahan’s election was defeated – 90 to 89.

The disapproval of Manahan as HSF President by the students means there will be four new executives and no President come May 1st.

“It’s unfortunate (not having a president), but that’s what the students wanted,” said Tahir. “We have to go with it, have to compensate for it.”

Von Doom echoed Tahir’s statements. “We have four strong executives, we have full-time staff, we have a large team,” said Von Doom. “The President is a very important role, but we’re going to make up for it.”

The issue of changing the Elections and Appeals policy was suggested a few times at last week’s Board of Directors’ meeting, and was a point of discussion for many at the AGM. Former HSF Presidential candidate Jason Scully, says the policy needs to be explicit so that this sort of thing doesn’t happen again.

“Somehow get it all in there so it’s clear. Clarity is what needs to be done,” said Scully.