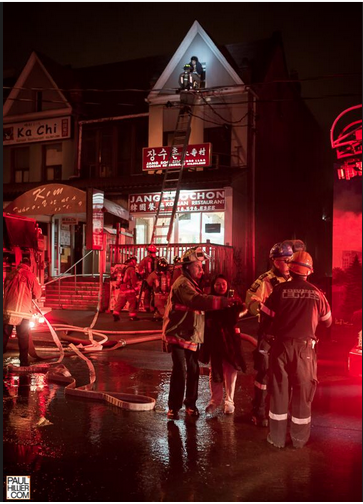 Kensington Market: Rescued woman is lead away as a man is helped out 3rd story window. pic.twitter.com/F9M9SJIbYn (mt @PaulHillierdesu)

Two people are dead after the unlicensed rooming house they were in caught fire early Thursday morning in Toronto’s downtown Kensington Market.

The two men were reported dead after they were taken to Toronto Western Hospital. Twelve people in total were pulled from the burning building in a three alarm fire at 2:20 a.m.

Police were able to get a woman and child out before fire fighters arrived on scene. While some people were able to walk away from the fire, others, mostly children, were removed from the building. All are being treated for smoke inhalation.

Jang Soo Chon Korean restaurant is on the main floor of the building located at 6 St. Andrew Street. The rooming house is located on the second and third floor of the same building.

City councillor Adam Vaughan was at the location Thursday morning and announced to reporters that the housing situation was illegal because rooming houses are not allowed in semi-detatched houses.

The residence that burned down this morning is illegal, because rooming houses are not permitted in semi-detached houses, Vaughan said outside the building that remains roped off with police tape, the Toronto Star reported Thursday.

Bruce Hawkins, City Hall Communicator with the Planning and Building division, confirmed the rooming house above the restaurant was not licensed by the City of Toronto and has not been inspected by the city.

A licensed rooming house must be located in and licensed by the City of Toronto. The building must be lived in by three or more unrelated persons without exclusive use of sanitary and kitchen facilities and operated for monetary gain through rental payment, the city’s website says.

Since the building was not licensed by the city, officials were unable to make comment about Thursday’s fire.

This fire comes just two weeks after one at Dupont and Dovercourt that killed three people. Both structures are reported to have had smoke detectors in them but it has not been determined yet if they were working.

Under the law, each floor of a residential building must have a working smoke detector.

Further investigation on the cause of the fire is being conducted by officials.