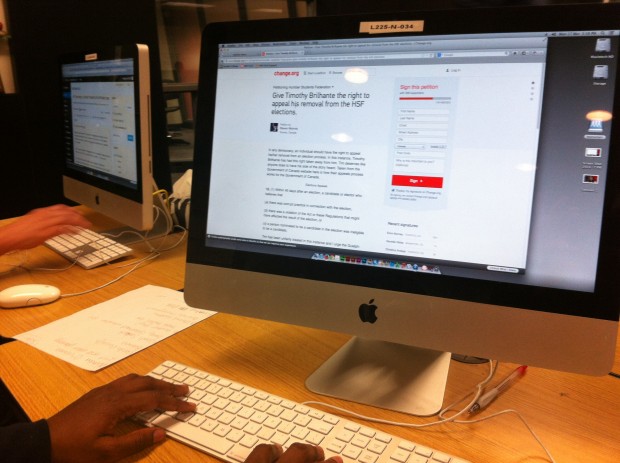 By: Darryn O’Malley and Natalie Hanniman

There was growing attention Monday to an online petition requesting that Tim Brilhante be allowed to appeal his removal from the ballot last week.

The sitting Humber Students’ Federation president was seeking re-election, but was disqualified late Thursday night – less than 24 hours before the polls closed.

So far, Chief Returning Officer Natalia Toussaint has not disclosed the reasons for the ruling.

Because Brilhante was disqualified, he was no longer considered a candidate and HSF electoral rules dictated that he was, therefore, no longer eligible to issue a formal appeal.

As of 2 p.m. on Monday, the petition on change.org had garnered over 300 supporters so far.

Steven McInnis, who is also an appeal review committee member for HSF, launched the petition. The webpage states:

“In any democracy, an individual should have the right to appeal his/her removal from an election process. In this instance, Timothy Brilhante has had this right taken away from him… Tim has been unfairly treated in this instance and I urge the Guelph-Humber and Humber community to sign this petition to condemn the decision by the HSF to waive his right to an appeal.”

“I believe anyone should have the right to appeal a decision that’s been brought forward,” Mcinnis said.

“No evidence has been provided as to his reasons for disqualification by HSF. Tim has given reasons that were presented to him. I feel those reasons to be invalid, as well as very weak.”

Below is the full interview with McInnis.