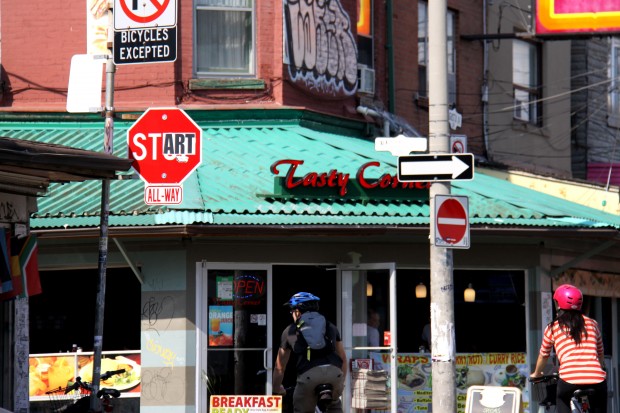 After two years of battle, Walmart will no longer be  moving into Kensington Market.

The development proposed by RioCan was set to be built on the land of the former Kromer Radio and surrounding area, on Bathurst Street., just south of College Street.

The latest pitch will no longer include Walmart and the space itself will decrease from the original 95,000 sq. ft., to 45,000.

Ed Sonshine, CEO of RioCan told The Globe And Mail, that if the project is approved, “we believe we can make arrangements with Walmart so that they can basically walk away from the deal.”

Kensington Market is widely known as a small neighbourhood located in the heart of downtown Toronto. With it’s free spirit, colourful shops, and multicultural neighbourhood, it was proclaimed a National Historic Site of Canada in 2006.

Many of those opposed to Walmart  don’t  live in Kensington but frequent the market, and have been working hard to make their voices heard, loud and clear.

The group started up an online petition last summer on change.org to reject the proposal of a three-storey Walmart shopping mall on the western edge of Kensington Market. The petition instantly went viral and currently has over 92,000 signatures.

Dominique Russell, a member of Friends of Kensington Market said it’s really important to protect the character of neighbourhoods.

“From Friends of Kensington Market’s point of view, we are cautiously optimistic, but we still want to see the details,” Russell said. “We are very pleased to see that the public pressure, the petitions, the public meetings, all worked so hard to say ‘no,’ have been heard.”

Russell also stated the fact that Kensington Market is one of the last open air food markets in North America and has retained an open community aspect.

Mika Bareket, owner of Good Egg in Kensington Market attended the meeting and tweeted out the news.

Bareket said the community is still concerned about which large retailer will be coming in, but he said there’s certainly some that are more appropriate to the area than others.

“The support from other neighbourhoods has been enormous and has really helped this new plan take shape. I’m a firm believer that community activism has prevailed but we’re still waiting. We will see what happens next.”

A telephone poll conducted by Forum Research in June 2013 revealed that 60 per cent of Toronto residents were opposed to the Walmart plan.

Though this is another step in the right direction, community opposition and complaints weren’t enough to stop the grocery store chain Loblaws moving next to Kensington Market, which will open at 297 College St. in 2016.

The new plan will be discussed at an upcoming community council meeting on at the end of the month.